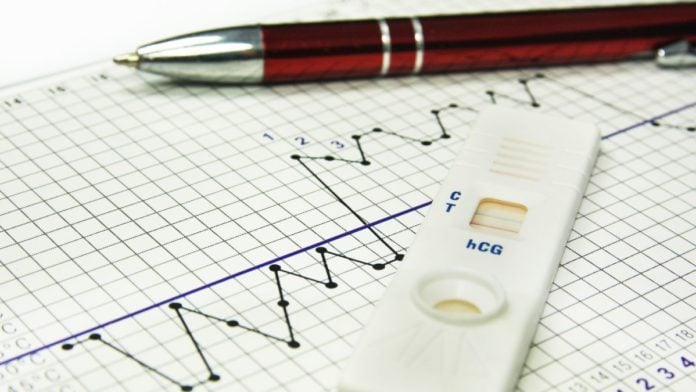 We all know how important it is to understand our bodies, and there is no area more important than understanding your reproductive system and reproductive health. Whether you are trying to prevent pregnancy or trying to conceive, knowing when you ovulate is a key piece of information that will make all the difference.

But, unlike your period, it is impossible to “see” ovulation when it happens. This is why there are so many devices on the market to help you find out when you ovulate. But how accurate are ovulation tests? Are they worth the money?

What are the different types of ovulation tests

Just to make things that little bit more complicated, not all ovulation tests are the same. But don’t worry, we will take you through everything you need to know about the different types of ovulation tests.

When you think about ovulation tests, the first ones that come to mind are probably the hormone-based types. With these tests, you pee on a stick or pee in a cup and dip the stick in, and it measures the hormones in your urine to determine whether or not you are ovulating.

Let’s do a quick biology recap about hormones in the menstrual cycle so that you can understand how these tests work. Throughout your menstrual cycle, your body releases different levels of hormones that trigger the body to perform different processes in your reproductive system. The hormones we will focus on are the luteinizing hormone (LH) and the follicle-stimulating hormone (FSH).

These hormones are at their lowest point when you are having your period because they aren’t needed. Around two weeks before your period, one of the follicles in your ovary will start to develop, ready to release an egg. At about 24 hours to 48 hours, before the egg is released, you will experience a surge of both LH and FSH, which triggers the follicle to release the egg. This is known as ovulation.

So, there is a very clear hormonal response immediately before ovulation, and it is this surge in LH that hormone-based tests can detect. And in terms of accuracy, they are pretty accurate. Most hormone-based ovulation tests come in at over 97% accuracy, which isn’t too bad at all.

It’s important to note that there is a difference between their negative accuracy and their positive accuracy. Hormone-based ovulation tests are very, very good at telling you when you are not ovulating. And it’s pretty easy to see why. You aren’t going to ovulate until you get that large LH surge, and the tests can pick up quite easily when there isn’t any of that hormone.

What they aren’t quite as good at is detecting when you are ovulating. So there could be variation in how quickly LH builds, or you might get a random spike in hormones that isn’t related to ovulation (some people get two peaks!). So a positive result on a hormone-based ovulation test doesn’t always tell you that you are definitely ovulating.

But knowing for sure when you aren’t and having a pretty good idea of when you are ovulating is still very useful information to know, both when you’re trying to conceive and when you are trying to prevent a pregnancy without the use of contraception.

Hormone levels aren’t the only change that happens in your body when you ovulate. You will also experience a change in your cervical mucus so that it becomes wetter, clearer, and more slippery, and your body temperature will dip when ovulation occurs. You can detect these things manually and track them yourself with a diary or in an app.

You will need to track them over time to detect a pattern because you will only be able to see when you have ovulated after the fact. Modern technology also means that there are all sorts of devices on the market that can do it all for you and can use algorithms and even AI to predict when you are going to ovulate next.

There are smart ovulation trackers that

It’s safe to say that the technology of ovulation prediction has come a long way! We recently compared three of the leading smart fertility trackers: Ava vs. Tempdrop vs Ovusense.

How accurate are fertility trackers to predict ovulation?

The accuracy of fertility tracking apps that don’t use any physiological methods is pretty low, at only 21%. This is because they can only ever give an estimate. But the accuracy of the more advanced smart ovulation trackers can range from 90% to 99%.

This is in line, or even better, than the hormone-based ovulation tests, and they can be a lot less cumbersome to use.

Pros and cons of internal vs. external ovulation trackers

As we have seen, there are two external methods for tracking ovulation: LH hormone levels and basal body temperature. There are trackers for each of these methods.

Trackers such as Ava (Check on Ava website) and Tempdrop (Check on Amazon) measure your basal body temperature while you are asleep. The main advantage of this method is how simple and convenient it is. You simply place the device on your arm or wrist, go to sleep, and then when you wake up in the morning, it gives you the temperature reading that you can then use to track.

So if you are up frequently in the night with a little one, do shift work, or have an active social life, this method quickly becomes less accurate. The Tempdrop app does use AI to account for these differences, but you will need to track for quite a while before this starts working.

The Mira fertility tracker (Check on Amazon) takes the well-established hormone detection method for ovulation tracking and brings it into the modern world. Rather than using disposable hormone strips that you then throw away, the Mira comes with a reusable stick that you place into the device after peeing on it. The information is then transmitted to your smartphone so that you can track your hormone levels in real-time.

The advantage of using hormone levels is that they are very accurate. The science behind them has been around for decades, and we know that it works. Of course, the main disadvantage is how fiddly and time-consuming it can be to pee on a stick every day.

The advantage of these trackers is that they predict your ovulation up to 24 hours in advance, and they can be used by people living with PCOS. This is because your core body temperature as a marker of progesterone levels is less affected by PCOS than the levels of other hormones, such as LH.

The main disadvantage is that it can feel quite invasive to wear a tracker like this internally every night.

Wearing the device continuously isn’t an issue with the cervical mucus trackers, such as the Kegg. You only have to insert the tracker for two minutes a day, and it works by giving out short electrical pulses that can detect the electrolyte levels in your cervical mucus.

The main advantage of this type of tracker is that it can give a very precise fertile window and earlier in your cycle so that you can plan ahead more easily. The main disadvantage is that it does involve manually inserting something into your vagina every day, which can feel quite invasive, and you have to make sure that you do it at around the same time each day.

Before you start trying to conceive, it can be a good idea to make sure that there aren’t any obvious problems that could prevent conception from happening as easily as it could. For example, women can take the EverlyWell Ovarian Reserve test, which measures their FSH levels for three days and can predict if they have enough eggs in their reserve to conceive easily.

In addition, men can take the EverlyWell Male Health test, which involves sending off a sample to be tested for hormones that are related to fertility, such as testosterone and estradiol.

When trying to conceive a new life, always talk to your doctor. Fertility is an incredibly complex process, and only a trained physician will understand and help increase the chances of conception.

At-home tests are just the first step, but with so many options available, you will certainly find an ovulation tracker that suits your needs, lifestyle, and personal preferences.