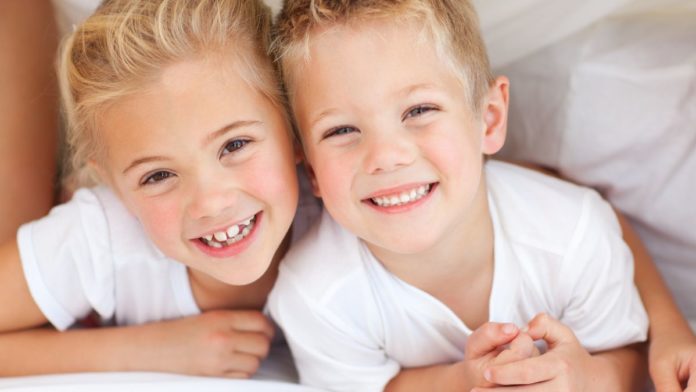 A popular belief is that a child will inherit half of his DNA from his mother and a half from his father. Based on this principle, it shall mean that brothers and sisters will carry one-half of common DNA and half-siblings one-quarter. So simple.

Well, genetics is a bit more complicated. I spent 12 years studying it, and the only thing I am sure of is that life is not made of black and white principles, but that grey is the dominant color.

This article will dig a little deeper into the genetic principles that support sibling DNA testing. Then, we will check if a simple buccal swab test can be relevant to assess this biological relationship.

What is the genetic behind a sibling DNA test?

Out of the 23 chromosomes pairs, we do not inherit full-length chromosomes from either of our parents. Instead, during the recombination that follows the fertilization of the egg, the mother DNA strand will be unequally mixed with the father DNA strand.

The recombination process is not perfect. Some regions will then come from the father and others from the mother. Even if, on average half-siblings will carry 25% of identical DNA, randomness is the fundamental principle behind relationship testing, and sibling DNA tests have to consider that.

Interestingly, 25% of shared DNA is only twice as much as the average percentage of DNA shared with a first-degree cousin. So, depending on the markers analyzed, it means that a cousin’s DNA testing could potentially appear as being your half-sibling.

It explains why selecting numerous markers is critical to obtain a conclusive result from an alleged sibling’s DNA test.

The most effective way to get absolute certainty when performing a DNA sibling test would be to conduct a whole-genome sequencing test. Unfortunately, this is not always possible, and most DNA tests to assess sibling relationships will rely on analyzing DNA paternity testing markers.

Most commercial companies rely on 16 markers for DNA paternity testing, even though some will check up to 68 genetic markers to achieve a 99.99 % certainty.

A siblingship test will have to analyze more markers for reaching conclusive results. Therefore, the more shared DNA will be found, and the more conclusive the test will be.

A centimorgan is a unit of genetic linkage named after the famous American geneticist Thomas Hunt Centimorgan who worked on the genetic distance separating one generation.

For the human genome, one centimorgan (cM) represents a million base pairs. According to the research conducted during the Blaine Bettinger’s Shared cM Project, the average common centimorgan between half-siblings was 1,783 cM (ranging from 1,317 – 2,312), representing between 55 to 85 DNA segments.

How to conduct a DNA sibling test?

As we mentioned, the best way to test for alleged siblings is to proceed to a whole-genome sequencing test. Numerous companies now offer such genetic testing for a reasonable price, but to our knowledge, none of them offers a legal sibling DNA test.

In a nutshell, the more markers will be analyzed; the more conclusive the test will be. That is why using full-genome next-generation sequencing that decodes 100 percent of the DNA is the ultimate way to find correlations and assess a half sibling relationship potentially.

Most at-home tests are considered peace of mind tests and are not legally enforceable legal sibling DNA tests instead of expressly requested by a court. In that case, DNA paternity testing will be most likely conducted.

If it is impossible to conduct the test on a paternal DNA sample, genetic material from the paternal grandparents can be used even though the percentage of shared DNA will drop dramatically.

Where to do a DNA siblingship test?

Numerous companies offer at-home siblingship tests at various price points and different quality levels depending on the amount of DNA or number of markers analyzed.

We selected three companies that have been in the genomics testing business for numerous years and are certified for the quality of their genetic testing laboratory capabilities. The companies are presented in no particular order, and we do not endorse the quality of the results they provide.

This company was established in 2004 in Florida and offers a full range of DNA relationship tests. For example, their sibling DNA test includes 42 markers. The samples are processed in an ISO 17025 accredited laboratory.

For $249, the test kit is ordered online, and the results are available in the next 3-5 days following the receipt of the samples from both siblings.

The buccal swabs can be sent to two different addresses.

We appreciate that AlphaBioLabs acknowledges that the results will be inconclusive in 24% of the cases. The company will refund the price of the sibling test if the results are inconclusive.

The company specializes in family relationship DNA tests. They use statistics to assess probabilities for paternity, grandparents, uncles, and of course, siblings.

Their sibling test relies on 46 markers and is 99.99% accurate, according to the company. In addition, MyForeverDNA laboratories are accredited by the American Association of Blood Banks (AABB) and are also CAP certified.

Paternity USA offers different types of tests depending on if the alleged siblings share the same mother or not.

The laboratory is fully accredited, including by the AABB and CLIA. It offers numerous informational or court legal tests.

Among them, we can cite:

More than a paternity test to identify the biological father, a siblingship test to assess half sibling relationship will depend significantly on the number of genetic markers analyzed and the quality of the bioinformatics tools used.

Relationship testing is a lucrative market, and it is critical to use a laboratory that complies with the regulations and latest standards in terms of quality of analysis. AABB and CLIA accreditations are an excellent way to check the seriousness of the company and laboratories involved in the siblingship testing.

As mentioned, the more genetic markers analyzed and the more reliable the potential identification.

Legal sibling DNA testing will often require a court order and imply a coon process conducted by a party that will inevitably increase the total cost of the process. Always make sure that the companies are accredited for conducting sibling status DNA testing by the state they operate in. Especially in the State, the parties involved in the process must be accredited by the state health organization.