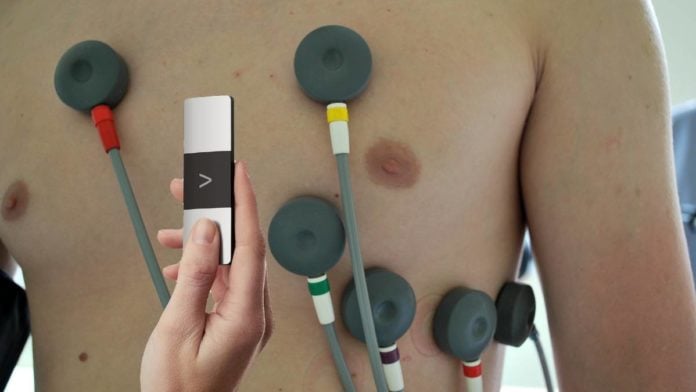 In July 2021, the team of Pr. Balsam from the Department of Cardiology of the Medical University of Warsaw, Poland, published the results of a comparative study that may be found quite disturbing.

They evaluated the Kardia mobile accuracy compared to a 12-Lead Gold standard electrocardiogram (EKG). The prognosis value obtained with a $100 pocketable device to diagnose atrial fibrillation and atrial flutter was comparable, if not superior, to clinical devices costing more than several thousand dollars.

So undoubtedly, the Alivecor Kardia Mobile is accurate and useful. In this article, we will go through the numerous scientific studies that support this statement.

At first, let’s check on this little device and why detecting atrial fibrillation and monitoring the heart rhythm are essential.

How does the Kardiamobile EKG work?

The Alivecor Kardiamobile comes in two flavors: single-lead or six-lead. The company claims that in just ten years, its devices recorded more than 100 million electrocardiograms. That is most definitely a lot of data to work on and optimize the algorithms.

Using the Kardimobile devices is simple. Just put your fingers on the electrodes, and the electrical signals generated by your heart will be transmitted either via ultrasound or Bluetooth to the smartphone companion app for the single-lead or 6L, respectively.

The signals are automatically cleaned and smoothed for more accessible analysis.

What can Kardia mobile detect?

The algorithms and devices are FDA-cleared for the detection of various types of arrhythmias. The Kardia app is available for iOS and Android and offers the following determinations:

When feeling your heart pounding, it is reassuring that you carry a robust ECG monitor in your pocket that will let you know if you stop drinking coffee or if it is advisable to get an appointment with your doctor or a cardiologist to investigate your potential cardiac arrhythmia further.

The critical point is to know that the data you collect is accurate and that possible atrial fibrillation detection (af detection) is meaningful. Let’s investigate further.

Alivecor and Apple have complex relationships made of court cases and trials. Alivecor is accusing Apple of abusing its dominant position to monopolize the atrial fibrillation detection market. We will not take sides and only stick to science.

The Center for Disease Control (CDC) estimates that more than 12 million people in the United States will be suffering from Atrial Fibrillation by 2030. Due to lifestyle, hypertension, and an aging population, cardiac arrhythmia is becoming a genuine public health concern. Especially when considering that up to 6 million Americans suffer from a potentially life-threatening condition without even being aware of it.

Mobile Health (mHealth) technologies are a convenient way to improve awareness, improve self-management, and quickly check on the efficacy of a treatment.

In a large-scale clinical study including 419,927 participants over eight months, the Apple Watch detected irregular heart rhythm in 0.52% of the participants (2161). One-third of the notifications were subsequently confirmed as atrial fibrillation using a standard ECG monitor. Among those who returned an ECG, identification of atrial fibrillation was recorded 84% of the time. This study sponsored by Apple and conducted by Stanford was the first large-scale clinical study to prove the benefits of the smartwatch, the Apple Watch, in detecting a potentially deadly condition requiring appropriate treatment.

In another study conducted by the Cleveland Clinic, researchers found the Apple Watch 4 correctly detected 41% of Atrial Fibrillation. In comparison, the retrievable pdf of the waveforms strips was 96% accurate in AF detection.

Other studies are ongoing to investigate the Apple Watch’s potential further, notably, the one in collaboration with J&J, aiming to recruit 150,000 participants. Nevertheless, the use of the Apple Watch is undoubtedly a robust and easy way to detect arrhythmia without having to go to the hospital or visit a cardiologist.

Numerous studies validated the accuracy of the AliveCore KardiaMobile device. In 2019, Dr. Gunther Eysenbach, from the Justus Liebig University in Germany, published a meta-analysis of the accuracy of the mHealth devices for the detection of atrial fibrillation.

He noted that the KardiaMobile that found very accurate when compared to the 12-lead EKG reference method. In addition, studies conducted by Koltowski et al. and Lowres et al. found the single-lead Kardiamobile as highly accurate compared to a 12-lead electrocardiogram.

In patients suffering from paroxysmal or persistent atrial fibrillation, the Alivecor device was also very accurate in the study conducted in 52 elderly patients by Dr. Williams at the Cleveland Clinic in Ohio.

Interestingly, in the SAFETY trial aimed at defining the cost-benefits of various devices in detecting heart rhythm abnormalities, the AliveCor KardiaMobile was again found very accurate. Still, its performances were not superior to other inexpensive devices such as the Polar-H7 and Firstbeat Bodyguard 2. The SAFETY study included 418 participants from three general practice surgeries in Hampshire, United Kingdom.

The Kardiamobile single-lead device accuracy is now widely demonstrated, but what about the more recent six-lead device? Does it provide additional benefits in detecting atrial fibrillation and other anomalies in the heart rate? We reviewed the Kardiamobile 6L and were utterly impressed.

The new possibilities offered by the use of 6 leads were the subject of the study conducted by the team of Pr. Kubey from the Mayo Clinic, in collaboration with the division of cardiology of the Thomas Jefferson University Hospital in Philadelphia. The new Kardiamobile 6L offers six leads of the traditional 12-lead electrocardiogram and is the first of its type to be cleared by the FDA.

Some drugs such as Hydroxychloroquine are used to treat. Covid-19 patients are known to prolong the QTC interval. Patients with prolonged QT/QTC interval are at greater risk of atrial fibrillation and sudden cardiac death.

Some of the conclusions of the study were that “this technology delivered consistent, accurate results among special patient populations” and that this technology “provides evidence that the use of KardiaMobile 6L can likely be extended beyond inpatient COVID-19-related rhythm monitoring…”

ECG devices are expansive, and their availability can sometimes be limited. However, the team also noted that “the KardiaMobile 6L device addresses the potential shortage of remote ECG machines cost-effectively.”

The Kardia device is not yet cleared for detecting heart attacks. Somehow, clinical studies proved that the small ECG device accurately detected heart disease and irregular heartbeat. Other mHealth devices may be able to do as well. The Apple Watch is a notable example as it also proves very accurate.

Somehow, the Alivecor Kardiamobile 6L goes one step further. By detecting QTC prolongation, it offers the possibility to accurately monitor patients treated with drugs known to bear cardiac side-effects. Especially in times such as the pandemic we live in, being able to use simple and relatively inexpensive devices to monitor your heart rhythm is not only a potential lifesaver but also contributes to maintaining the cost of healthcare down.

In an ideal mHealth world, patients will not need to go to the hospitals or visit a cardiology clinic to get their electrocardiogram recorded. Instead, a small pocketable and connected device is allowing to collect and transmit the ECG tracing remotely.

The world is changing fast, and remote heart rhythm monitoring is undoubtedly the first step towards globally connected healthcare. Some of the critical elements for such an evolution are linked to the devices’ accuracy and reliability. In that sense, the KardiaMobile seems to have achieved such a goal.

Are smart pills the future of medication adherence?