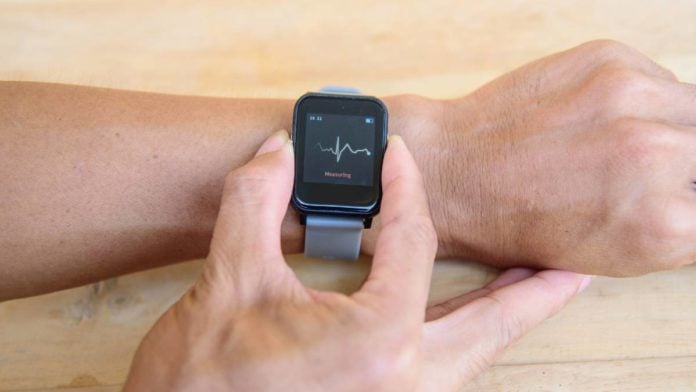 Despite being health powerhouses, no smart watch has yet been approved by the US Food and Drug Administration (FDA) or any other national regulatory body for detecting heart attacks.

A legitimate question is why no device has yet been approved to identify a condition that occurs every 40 seconds in the United States. Yes! Every 40 seconds, an individual will suffer myocardial infarction. It is 805 000 heart attacks every year, with 12 percent of the patients sadly dying from it.

A prompt diagnosis and treatment, mainly aiming at reestablishing the blood flow within the cardiac muscle, are critical for limiting the heart health consequences—every 30-minute delay in coronary-reperfusion increases by 7.5% the 1-year mortality rate.

An electrocardiogram is the first test to conduct to diagnose myocardial infarction, and every minute counts. Therefore, the need for trained paramedics or physicians relying on bulky equipment will inherently create time lags in the diagnosis.

Hence the potential for a smart watch heart attack detection approach. However, one of the critical limitations of the Apple Watch ECG and of most other devices is that they rely on a single-lead ECG (2 electrodes) analysis.

Single-Lead ECG proved sufficient for detecting irregular heart rhythm, but heart attacks require a more precise analysis of the different heart electric axes. The Golden Standard is a 12-lead electrocardiogram that no ECG smartwatch can yet provide.

It may soon change, according to an article published recently in the Journal of Medical Internet Research by the team of Pr. Yoon, who has been working on improving ECG detection using wearables for years.

The idea of using an Apple Watch and holding it at different positions on the chest of the patient to ultimately collect enough data from different electrical axes to simulate a clinical 12-Lead electrocardiogram has been explored in recent years.

Detection of ST deviations with an Apple Watch

In an article published in JAMA Cardiology on August 31, 2020, a team of Italian researchers conducted a limited clinical trial on 100 patients suffering from chest pain and admitted in the ER to detect ST-segment changes (often associated with myocardial infarctions).

They used an Apple Watch Series 4, the latest model at the time of the study, to record the electrical signals at different locations to simulate a multi-lead electrocardiogram. The data were stored in the Health App of the iPhone Pro 11. Patients’ electrocardiograms were recorded with both a standard 12-lead electrocardiograph and the smart watch protocol. Considering the number of recording locations, the smartphone was positioned by a healthcare professional.

Both electrocardiograms and Apple Watch recording were then interpreted by experienced cardiologists that considered the results of the standard 12-Lead ECGs as the reference values. The Apple Watch revealed an STE deviation that showed a sensitivity of 93% and specificity of 95% when compared to the Golden standard ECG.

Despite its potential, the authors somehow noted some severe limitations to using a wearable device to detect cardiac events.

The first one was the need to precisely position the watch and the impossibility of collecting the data while wearing it on the wrist only. Secondly, assuming the ECG was recorded correctly, the data needed to be interpreted manually by a cardiologist. Hence, making this approach not practical to use and limiting its potential to exceptional circumstances such as pandemics, remote locations or catastrophes.

Machine learning has somehow made tremendous progress in the last few years. Combining the accuracy of the electrical smart watches sensors with the data procession power of artificial intelligence was the next step.

Their team went beyond developing an algorithm but also used the results to determine the optimal number of positions needed (leads) for the results to show sufficient predictive power.

The algorithm they derived was trained/validated on a database containing more than one million ECGs collected on close to 450,000 patients. Ultimately, after applying exclusion criteria, more than 200,000 ECGs were considered in the study.

This model is the first to assess life-threatening conditions efficiently and reliably potentially opening the path toward its use in the fields. For example, in case of chest pain, the patient could be guided by an App. in correctly positioning the leads. The neural network at the core of the AI algorithm appeared to be sensitive and specific enough to assess more than a change in heart rate but a life-threatening cardiac event as well.

The use of only three leads coupled to a predictive algorithm may be enough to establish an initial diagnosis and could potentially be helpful in a triage perspective before the arrival of the paramedics.

Despite the FDA clearances of various models for differentiating between atrial fibrillation and normal sinus rhythm, to date, no smart watch yet has the capabilities and underlying algorithms to diagnose a potential heart attack reliably.

This much-needed feature can be complex to use. The necessity to position the watch at different chest locations carries numerous challenges especially when the patient is on his own and in pain.

According to an article published on the Harvard Medical School website, a cardiologist at the Harvard-affiliated Brigham and Women’s Hospital, Pr. Peter Libby, considers that the technology carries great promises but is not ready yet.

According to him, it may take up to 10 years to conduct the clinical trials, get the necessary regulatory approvals and bring the technology to your wrist. This new approach somehow carries a lot of promises and has the potential to save lives in the years to come.

Up to its approval in case of Chest Pain, do not yet look at your wearable device but call 911 and remember that every minute counts.