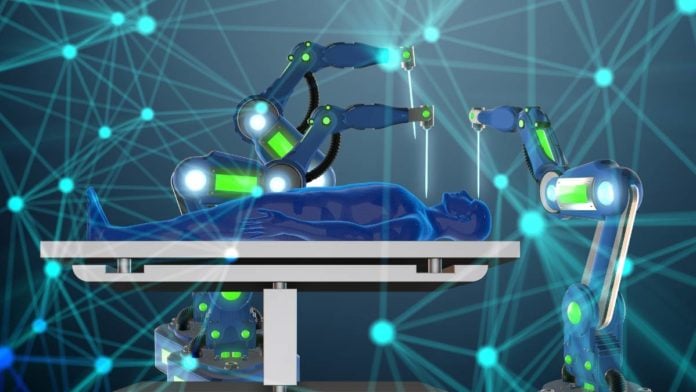 Nobody will deny that Bill Gates is a savvy investor. So when a company founded just seven years ago receives funding from the Bill Gates’ Gates Frontier, it certainly proves that the technology is sound and that the market has great potential.

When knowing that other tech titans such as Vinod Khosla (Sun Microsystem founder), Eric Schmidt (former Google CEO), and Jerry Yang (Yahoo founder) also invested in the company certainly means a lot about the potential of the Vicarious Surgical.

Research and Markets estimate that the global surgery market will reach $16.77 billion by 2031. A three-fold increase from what the market was in 2020.

This growth is mainly fueled by the aging population and the need for healthcare expenditure on the healthcare side. For example, public healthcare systems expect to control better the expenditures linked to surgical procedures by reducing recovery time.

Intuitive Surgical as the historical leader

Forty years ago, the research conducted at SRI International, a non-profit research institute funded by the NHI, gave birth to Intuitive Surgical and its famous da Vinci surgical robot.

In the twenty years following its inception and with a market capitalization close to $125 billion, the company became the undisputed worldwide leader in Robotic Surgery.

With more than 5,500 units installed in more than 1,500 hospitals, more than 90% of prostatectomies are now performed with the FDA-approved da Vinci system.

In recent years, new companies have surfaced, intending to drive down the prices and improve accessibility. Vicarious Surgical’s robot is one of these competitors that include AngioDynamics, Titan Medical, CMR Surgical, Johnson&Johnson, Auris Health, and Medtronic, to name a few.

The young Vicarious Surgical could be one surgical robotics company among others. Still, its financial solid backup and breakthrough technologies make it a serious contender in the expanding field of minimally invasive abdominal surgeries.

The history behind Vicarious Surgical

Founded in 2014 by Adam Sachs, an MIT graduate, Vicarious Surgical has been on a meteoric rise with its single point of entry robot. Vicarious Surgical robot was granted an FDA breakthrough device designation status in 2019 even if little is still known about the underlying designation that combines Virtual Reality, 360 degrees visualization, 9 degrees of freedom and only requires a single 1.5 cm incision to get into the abdominal cavities.

The company very recently raised new funds via a private placement of common stock (“PIPE”) that attracted numerous Silicon Valley leaders and a merger with a Special Purpose Acquisition Company (“SPAC”). The new entity is now listed on the New York Stock Exchange with $425 million in additional funding.

The new listing took place through a $1.1 billion merger with the SPA D8 Holdings led by Hong Kong investor Donald Tang. Not bad for a company that has not sold a single system yet and is still two years away, at best, from doing so.

In just two weeks since its first day of trading, Vicarious (NYSE: RBOT) shares already gained fifty percent for a market cap of over $1.75 billion.

The influx of funds should provide Vicarious Surgical with the needed funding to develop their robotic solution. The goal is to reach the mandatory FDA approval stages and bring the robot to the operating rooms by 2023.

What are the benefits of this new miniature robotics approach?

Despite being minimally invasive, most surgical robots require multiple incisions to position the surgical instruments, lights, and cameras properly. A single incision is a grail in a field where the patient’s quality of recovery is directly linked to the lengths and number of openings.

According to Adam Schift, co-founder and Chief Executive Officer of the company, even the single-port robots have profound shortcomings “including at minimum a 2.5 cm length incision with complication rates approaching 10%, minimal force capability, limited motion, and even higher costs than multi-port robotics.”

Despite a 20% complication rate for open Surgery, surgeons still prefer to use this procedure in over 50% of the cases, leaving a vast potential for companies to address surgical procedures differently.

Vicarious robot-assisted surgery technology is different and offers a new level of convenience for surgeons and a more competitive price point that could drive the adoption rate.

The two robotic arms are designed to mimic the surgeon’s upper-body joints, giving him full access to the abdominal cavity and only requiring a 1.5 cm incision. The camera movements also follow the movements of the surgeon’s head, providing a fully immersive experience.

According to Schift, the company has reinvented the standard actuators into what they call decoupled actuators that offer “many more joints in motion all inside of the abdomen with incredible force capabilities and all through a 1.5 cm incision.”

Vicarious aims at selling 1,000 units and reaching a turnover of $1 billion by 2027. Compared to legacy robotic platforms, Vicarious offers technological advantages that improve the comfort of the procedures for both the patients and the surgeons. Moreover, with an envisaged price of $1.2 million per robot, Vicarious Surgical is also very competitive.

Their strategy is to initially concentrate on ventral hernia procedures, representing 350,000 per year, with further growth in other hernias, gallbladder procedures, and hysterectomies, for an additional four million potential procedures.

In its short history, surgical robotics brought dramatic hopes to improve surgical outcomes for the patients, comfort the surgeons, and reduce healthcare costs.

Despite the more than twenty years of Intuitive Surgical domination, big companies such as Johnson&Johnson, Medtronic, or Zimmer are on a path to address a double-digit growth market that is planned to triple in the next ten years.

In just seven years from an MIT students project, Vicarious Surgical convinced some of the smartest technology investors and was successfully listed on the New York Stock Exchange.

With a disruptive technology robot, Vicarious offers minimally invasive surgical robots with the potential to disrupt a more and more competitive market that will ultimately benefit the patients.