Home News CES2022: What are the trends and new products in Digital Health? 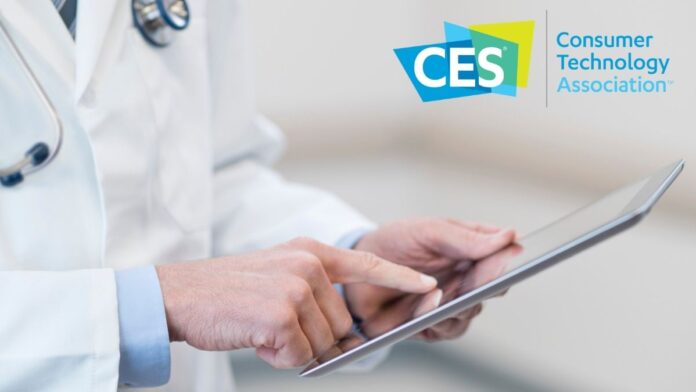 The CES 2022 is now over, and Digital Health was one of its central topics, proving if needed that Digital Health was not reserved for techie fitness addicted to wearable gadgets but was on a path to becoming a central component of healthcare.

Today, wearables are more than simple step counters; they are becoming health powerhouses with the ability to track temperature, blood oxygen saturation, detect sleep patterns, and even act as FDA-cleared arrhythmia detectors.

In the last couple of years, Fitbit, Apple, and Garmin introduced algorithms that can record single-lead electrocardiograms and use AI-powered algorithms to detect Atrial Fibrillation or bradycardia.

Withings, the inventor of the connected scale, presented their latest smart-scale that introduces new features such as the integration of a 6-lead EKG allowing to detect AFib in conjunction with body composition analyses. By synchronizing the results with the HealthMate app and potentially connecting the users with health professionals. Withings’ Body Scan scale transforms the scale into a health station and makes it an integral part of the healthcare ecosystem.

Beyond the detection of heart health, the Withings Body Scan scale can also measure the Sweat secretion in the foot to evaluate the sudomotor function, which is then combined into a single score for nervous system health. A first to our knowledge.

Integrating electrocardiograms into smart devices and wearable is now becoming the norm with all of the patients’ benefits and convenience of use. The only drawback is the absolute necessity to change the doctor/patient relationship and ensure that the algorithms are robust enough to ensure the reliability of the measurements.

During the CES 2022, two Japanese startups also presented devices that paved the way to non-invasive and continuous blood sugar monitoring. Light Touch Technology presented a prototype of what is seen as the holy grail for wearables. Offering the possibility to measure blood sugar levels without the need for daily finger prickings.

Quantum Operations, another startup based in Japan, also showcased its new ambition to offer painless ways for people with diabetes to manage their disease more conveniently.

Both companies received an Innovation award, but despite their promises, the devices are not expected to hit the shelves before a couple of years at least.

Wearables makers are always careful not to cross the line between a smartwatch and a medical device. For example, Apple has been rumored to work on ways to add blood glucose monitoring to the Apple Watch Series. So far, these are still rumors, and we suspect that such health tech features will not be available any time soon. Not only due to the technical challenges but mainly because of the regulatory and legal challenges that could arise from such readings.

Smartwatch makers have already embraced many health features, but blood sugar monitoring may be a boundary that big tech companies are still not ready to cross. Detecting a risk of Atrial Fibrillation is informative and potentially very useful, but ultimately the diagnostic will have to be confirmed by a cardiologist. In addition, blood sugar monitoring will involve immediate consequences such as injecting insulin, and an incorrect reading will potentially carry immediate life-threatening consequences.

The Smart Ring landscape will see the rise of new players

Oura has been dominating the smart ring market for numerous years now, but new players such as Movano are expecting to get a piece of the pie as well.

The company aims at offering a stylish ring coming in four different colors, black, copper, silver, and gold. With technical features appearing on par with the Oura ring and a more stylish design, the winner will ultimately be the one that will be able to offer a convenient way to measure activities and vitals at the best price.

Packed with sensors but still with a fashionable look, smart ringsHealth technology players are slowly moving away from the one-off sale model towards the subscription model. Movano also appears to favor such an option that offers the benefits of lowering the initial investment for the end-user and building a base of long-lasting users for the makers.

Movano aims to initially offer non-FDA-approved rings and gradually move toward the Class-II certification process. The rings should hit the shelves during the second semester of 2022. We look forward to checking them out and seeing if Oura has a new rival.

Ultimately, the end-users will be the primary beneficiaries of this technological rivalry that should drive the prices down while ensuring a constant improvement of the features.

Smartwatches are improving one tick at a time

During this primarily virtual CES, we noticed that smartwatch makers had entered the maturity age. No actual breakthrough announcements. Wearable Health technology is now part of the daily routine of one-in-five Americans, and the pace of technological breakthroughs is stabilizing.

Garmin announced the release of two new models: the Garmin Venu 2 Plus and the Garmin VivoMove Plus, while Skagen introduced the Falster Gen 6. These smartwatches improve on the previous iterations but do not add any digital health innovation breakthroughs.

With the recently released Apple Watch Series 7, Galaxy Watch 4, and Fitbit Charge 5, it seems that the CES is not anymore the chosen event, if it had ever been, for big players to disclose their latest innovations.

What future for Healthcare Innovation

Despite the constraints linked to Covid 19 pandemic, the Las Vegas CES2022 proved a successful event for Digital Health. Remote Patient Monitoring is becoming a reality, and breakthrough technologies such as non-invasive blood sugar monitoring are moving forward.

Abbott Laboratories CEO and Board Chair Robert Ford delivered the closing presentation, which is another sign that Digital Health is now an integral part of our lives and is on a path to change the way we manage our health and communicate with our doctors.

Digital health technologies are becoming more mature and will continue to expand to become an integral part of our lives, will it be on our wrists, fingers, in our bathrooms, or even toilets.