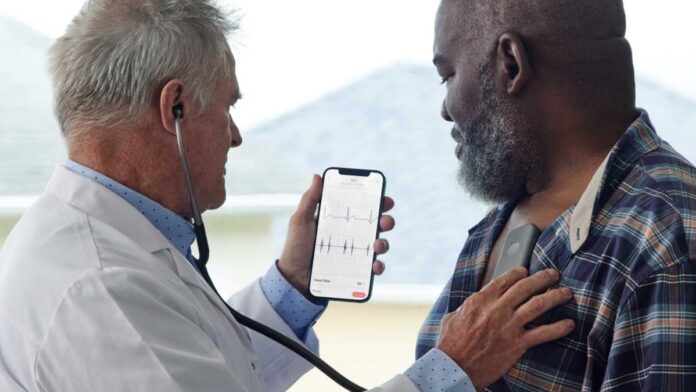 Eko Health also provide a hybrid device, the EKO Duo, which combines the convenience of a fully digital stethoscope with a single-lead electrocardiogram (ECG).

Finally, the EKO Core Digital Attachment allows converting most of the analog stethoscope to a digital one by connecting an electronic attachment to the tubing.

The California-based company attracted more than $125 million in investments in less than ten years. It gained a premium reputation for developing both quality hardware and top-of-line Deep Learning-based cardiac algorithms.

March 2022 has been a fascinating month for the company, which evolved from a UC Berkeley startup founded by three friends to one of the leading global electronic stethoscope players.

The company received, according to TechCrunch, $30 million as part of its C funding round, welcomed Eric Davidson, its new high-profile CEO, and released a new App aimed at catching heart diseases early.

As of March 2022, all EKO Health devices come with the Heart Disease detection feature that makes the most of Artificial Intelligence algorithms to detect murmurs and Atrial Fibrillations (AFibs) automatically.

These features are FDA-cleared and are poised to help clinicians make better diagnostics during auscultation. In addition, the software opens the possibility for non-cardiologists or non-specialized doctors to pinpoint a potential Heart disease early and refer to the patient for a more comprehensive analysis.

We hope that the companion app, available for iOS or Android tablets/phones that come with stethoscopes, will change the way diagnoses are poised and ultimately save patients’ lives by providing early diagnosis and treatment.

Atrial Fibrillation refers to an irregular and rapid heartbeat, possibly leading to the formation of blood clots in the heart. When the blood clot gets carried into the central circulation, it can lead to stroke.

Such arrhythmia is responsible for 10-12% of ischemic strokes representing more than 70,000 episodes yearly in the United States only.

The number of AFib episodes increases with age and is closely related to behavior. For example, smoking, drinking alcohol, being overweight, or suffering from diabetes or high blood pressure contribute to an increased risk.

We all felt our heart racing from time to time in our chest and then slowing down. The difficulty of diagnosing Atrial Fibrillation is that the episodes are transient, leading to gross under-diagnosis.

In 2018, Turakhia et al., from Stanford University School of Medicine, published a striking article in PLOS that 13.1% of Atrial Fibrillation remained undiagnosed, representing 700,000 people at the time of the analysis.

Being able to rely on simple auscultation to increase the AFib detection rate has the potential to improve care and limit the subsequent risks associated with this type of arrhythmia.

By combining heart disease detection algorithms with a stethoscope, EKO Health increases the benefits of routine auscultation. In addition, it expands the diagnostics capabilities of one of the most widely spread medical devices.

Any doctor, respiratory therapist, nurse, or EMT can become part of a whole new way to detect Atrial Fibrillation. Even if the detection algorithms are not perfect, they are the first way to identify a condition that could have remained undetected for numerous years with all of its health risks.

How has the EKO Heart Disease Detection Software been developed?

The deep learning algorithm developed by EKO Health has been clinically validated and explained in a recent article published by a multidisciplinary team of cardiologists and computer scientists.

The results presented in the Journal of the American Heart Association are pretty impressive. Using more than 34 hours of heart sound recording collected on 962 patients, the algorithms were trained on annotated data.

The algorithm’s sensitivity and specificity for identifying murmurs are 76.3 percent and 91.4 percent, respectively.

With all of these supporting data, the algorithm was cleared by the FDA, bringing new technology to the toolbox of clinicians for detecting heart diseases.

What are the next steps?

With a new trench of funding, a partnership with 3M Littmann, a new and very experienced CEO, the future looks bright for EKO Health.

The company’s constant innovations may well change how doctors will use their stethoscope, making it the frontline medical device for detecting a cough or bowel movements and for early identification of heart diseases leading to better treatments.

The paper tube built by Dr. Laennec has come a long way, and EKO Health is most certainly one of the leading companies to contribute to the future of auscultation.