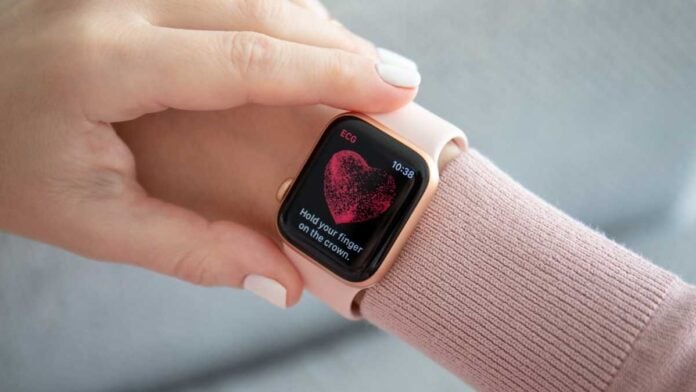 Tim Cook initially presented the first Apple Watch in 2014 as a smart fashion accessory. However, as early as 2015, the marketing focus shifted towards health and fitness, with heart rate monitoring as one of the critical components.

The new Apple Watch Series 7 focuses on health features and makes the most of its sensors to track sleep, measure blood oxygen level and heart rate variability, and detect abnormal heart rhythm, including Atrial Fibrillation. Needless to say that the accuracy of the heart sensor is critical.

How does the Apple Watch detect heartbeats?

Modern smartwatches and fitness trackers rely on sensors and on the properties of light absorption to compute an accurate heart rate.

The Apple Watch relies on green LED lights in combination with light-sensitive photodiodes to determine how much blood is flowing through the wrist at any point in time.

When your heart beats, the blood flow in your wrist increases, as does the absorption of green light. The photodiodes will detect the differences in absorption, and a dedicated algorithm will transform the light variations into heartbeats.

What does the science say about the accuracy of the Apple Watch Heart Rate Monitoring Accuracy?

Over the years, numerous scientific studies aimed at understanding the accuracy of the Apple Watch to detect heart rate data.

One of the latest studies was published in JMIR Mhealth Uhealth in 2019 by Falter et al. The purpose of this analysis, conducted in Leuven, Belgium, was to determine whether mobile health technology might be utilized to monitor the home-based exercise in future cardiac rehabilitation programs.

Using a 12-lead electrocardiogram (ECG) as the reference and while rearing an Apple Watch, 40 patients with cardiovascular disease were put through the test on a cycle ergometer for a week.

While the Heart Rate measured with the Apple Watch was considered clinically relevant, the associated energy expenditure was systematically overestimated.

If the results were considered accurate enough for healthy individuals and even for patients with heart diseases, another study suggested being cautious for people suffering from atrial fibrillation.

Inpatientpatients with Atrial Fibrillation, the study results conducted by Seshadri et al. in 2019, showed that the correlation coefficient between the Apple Watch 4 Heart Rate Data and the telemetric reference was only 0.7.

The conclusion was relatively straightforward as it suggested that before employing the Apple Watch 4 wearable wrist monitor to monitor heart rate in patients with cardiac arrhythmias such as atrial fibrillation, it is essential to remember that the device is not without risks.

It should somehow be noted that an Apple Watch 4 was used. The technology has evolved in recent years, meaning that the new devices may undoubtedly be more accurate, as presented in the previous research we mentioned.

How does the Apple Watch compare to other trackers for Heart Rate analysis?

Chest straps work in the same way an electroencephalogram does. However, they measure electrical signals directly at the level of the heart. This ensures an accuracy estimated to be close to 91% compared to clinical ECG.

Measuring at the wrist level comes with specific constraints, such as the need for a steady contact between the skin and the photodiodes. While moving or exercising, the contacts may get loose, leading to an inaccuracy in the readings.

The differences are somehow not significant, and as long as the heart rate sensor is tightly secured on the wrist, the results should be reliable enough for most daily uses.

In 2019, a study compared the heart rhythm collected through an Apple Watch and a Polar chest strap.

Based on the findings obtained, it looks as though the Apple Watch is equivalent to the chest strap monitor when riding at a fast pace. In addition, a previous study has revealed comparable findings while exercising on a treadmill, demonstrating that the chest strap and Apple Watch both detected heart rate rates that were identical to one another (Gillinov et al., 2017.)

.Measuring the RR interval and heart rate is a critical component of any smartwatches or fitness trackers. In addition, the data is used for numerous analyses, such as defining the Resting Heart Rate and VO2 max, extracting the sleep cycles, and even calculating the consumption of calories.

The Apple Watch Heart Rate detection accuracy has improved over the years. In addition, scientific studies backed up the reliability of the sensors and photodiodes for most activities and users.

Best Smartwatch with Oxygen Sensor for 2023