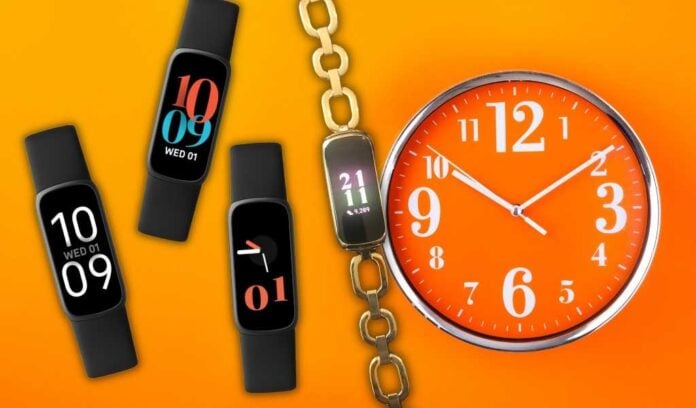 The Fitbit Luxe is undoubtedly one of the best fitness trackers of 2022 when willing to combine style and smart features. I tested the Fitbit Gorjana and loved it. I loved it so much that I am still wearing it.

With its golden bracelet, the Gorjana will match your outfits, will they be during the work day or evening session at the gym, and will certainly look classy even when wearing a cocktail dress.

A shiny golden fitness band may be great, but they will look only as good as their clock faces. This article will help you better understand what clock faces you can expect for the Fitbit Luxe, how to install them and make the most of them.

How many Clock Faces does the Fitbit Luxe have?

With its bright 0.76 AMOLED display, the screen of the Fitbit Luxe provides limited screen real estate for the clock faces.

Unfortunately, contrary to the Fitbit Versa 3 and Fitbit Sense, installing third-party designed watch faces on the Fitbit Luxe is impossible. Instead, you will have to stick to the 18 clock faces provided by Fitbit.

The only regret we have is that if the Fitbit Luxe successfully merged retro and modern designs, the clock faces would look cheap. This is because they do not convey the premium feel of the Fitbit Gorjana.

Out of the 18 clock faces available for the Fitbit Luxe, only five are analog, leaving 13 digital ones.

Below is an illustration of Analog clock Faces to choose from. I agree with you. They are functional but not outstanding.

As for the Digital clock faces, their cartoonish aspects may not be for everyone’s taste. Somehow, remember that some faces will do much more than show the time. Tapping on them will add other information that makes the most of the data collected by the sensors of the Fitbit Luxe. The heart rate, number of steps, and number of active zone minutes are also available depending on the design chosen. It is a nice perk that will sweeten the lack of inspiration of most analog designs a little bit.

The excellent point is that Fitbit regularly update the list of available watch faces, so by keeping the Fitbit Luxe up to date, there is a good chance that you will at one point find one that you will like and that will complement your watch nicely.

How to change the face on Fitbit Luxe?

Changing the clock face on the Fitbit Luxe is a simple process. Just follow these steps:

Open the Fitbit App on your iOS or Android smartphone,

Tap on the icon representing your account. It is located on the left top corner of the screen

From there, select the Fitbit Luxe

Tap on “Gallery” and select “Clocks.”

Just browse through the clock faces, choose the one you like and tap on “Install.” The clock face will automatically download and get installed on the Fitbit Luxe.

Will Fitbit add custom clock faces to the Fitbit Luxe?

It is a very legitimate question I have been asking as well. But unfortunately, according to the answer from one of the moderators on the Fitbit support forum, there is no real hope that Fitbit will ever add the possibility for custom clock faces to become available for the Fitbit Luxe.

It is the same thing with the Fitbit Charge 5 as well. I do not know why this is the case, but it seems that custom watch faces for fitness trackers are not on the Fitbit roadmap.

Many Fitbit Luxe owners complain about the lack of customization of the Fitbit Luxe clock faces. They do not understand why newly released fitness tracker models display fewer customization options than the previous models. We could not agree more!

How to change from a 24-hour to 12-hour basis on the Fitbit Luxe?

Numerous users wondered how to change the time from 24-hours to 12-hours basis on the Fitbit Luxe. Unfortunately, most of the clock faces will support this setting which may be confusing.

You do not have to fiddle with the clock faces but with the general settings to change it.

From the Account screen in the Fitbit App, tap on “App Settings” and tap on “Clock Display time.” A new screen will open from which you will be able to select a 12-hour base time.

The Fitbit Luxe comes with plenty of sensors and a long battery life that were until recently reserved for more expensive devices. In addition, the bands such as the Gorjana add another dimension to the fitness band, making it one of the first Fitness Tracker you will not be ashamed to wear outside of the gym.

The Fitbit Luxe clock faces may not add to the premium design, but they are functional and will give you the information you need…and this is what ultimately is the only purpose of a watch face.

Does Fitbit have fall detection?