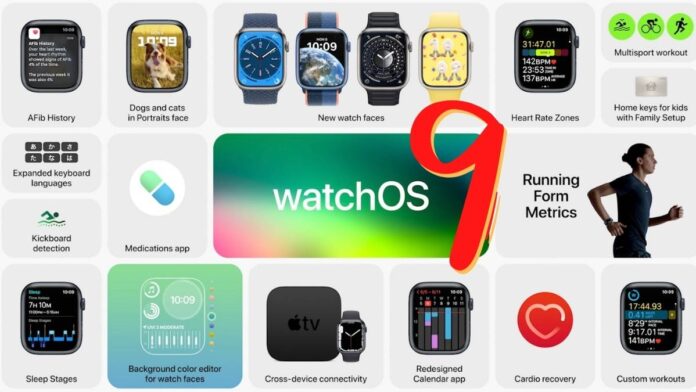 The WWDC 2022 started yesterday, and news have already shaken the Apple Community. We are thinking about the new Apple Air available next month, including the much anticipated M2 chip.

As of 2022, the Apple Watch is still the world’s best-selling smartwatch. Apple announced the iHealth tracking improvements to expect with the release in July of the WatchOS 9.

The WatchOS9 will be free to download and was said to be compatible with older Apple Watches Series such as the Series 4. This is excellent news for those who do not upgrade their devices yearly.

The Apple Watch relies heavily on its App ecosystem, which offers the possibility to choose from thousands of specialized applications.

This plethora of apps lets users choose the Health-related apps they genuinely need. Unfortunately, it somehow takes time to test the App that will genuinely meet your needs. App after App, the Apple Watch slowly turns into an iPhone with dozens of unused apps installed and never uninstalled. The result is that the screens are cluttered with icons. While this may not be so annoying when using a large screen iPhone, the Apple Watch’s screen real estate and built-in memory are much smaller, resulting in a hard-to-read screen and poor performance.

Even standard health-related features such as detailed sleep analysis are not natively available for the Apple Watch. So when Fitbit pride itself on providing a multitude of vitals and metrics analyzed while you sleep -the Fitbit Sense even analyzes your snoring-, The Apple Watch native sleep app will stick to the basic and let you know how long you slept. Competition is fierce in the smartwatch world, and Apple had to react. The WatchOS 9 will not bring technological breakthroughs for healthcare, but at least the Cupertino star watch will get closer to what its competitors have already been offering natively for years. Not a giant leap but a few steps in the right direction.

What will the WatchOS 9 bring to healthcare?

The WatchOS 9 is a mix of much-needed features that were still lacking and new features that may offer real medical value to the Apple Watch.

If you are like me, the first thing you do is the norming when waking up is to glance at your watch and check the quality of your sleep. Fair enough, I wear two smartwatches at night: a Fitbit Sense and an Apple Watch.

I do not even bother looking at the Apple Watch for sleep analysis.

RELATED READING: All you need to know about the Apple Watch Sleep Tracking…

The lack of a decent Sleep Tracking Analysis natively available for the Apple Watch has been the elephant in the room for numerous years. When Fitbit, Garmin, Galaxy, and even $50 fitness trackers have been offering the possibility to check on your sleep pattern, it was hardly conceivable that the Apple Watch, with its plethora of sensors and algorithms, had to rely on a third-party app for analyzing sleep in a more refined way than just letting you know how long you slept.

The gap has finally been closed, and the WatchOS 9 will natively let you understand how your sleep was structured.

The Apple Watch Series 7 includes numerous FDA-cleared sensors and algorithms. For example, the built-in electrocardiogram leverages clinically validated algorithms to detect Atrial Fibrillations, which is excellent but only provides a partial picture of heart health. Recently, Fitbit released an Atrial Fibrillation notification. Apple aims to go one step further and let users know the amount of time they spend in AFib. Much-needed information for doctors when diagnosing a patient.

RELATED READING: Fitbit Irregular Rhythm Notifications [What you should know]

Apple is currently clearing its AFib history algorithm with the FDA. Good to know that the AFib history will be easily shareable with your doctor. If everything goes according to plan for the Apple Atrial Fibrillation history algorithm, this feature may be one of the first to be genuinely clinically relevant and useful for doctors.

Medication reminder apps are not new, and we welcome the addition of such features to the Apple Watch. According to the presentation made during WWDC, WatchOS 9 will natively support a medication reminder. Interestingly, patients will be able to easily add medication to the App by either choosing from a list or by just scanning the pill box.

Even more interesting is the addition of a drug interaction algorithm. With 60% of Americans being treated for a chronic condition, this feature may be a true life-saver. According to an article published in 2019 in the Americal Family Physician Journal, drug interactions are responsible for 2.8% of all hospitalizations annually in the United States. It is close to a quarter of a million hospitalization annually. Being able to predict and help patients better manage and avoid drug interaction also has excellent potential for improving public health.

The Apple Watch is famous for the accuracy of its heart sensor. However, the Apple Watch was great for letting you know your heartbeat but could not rely on specific heart zones to improve training. The widely requested heart zone feature will finally be available natively with the WatchOS 9.

RELATED READING: Why does knowing your Heart Rate Zones matter?

For healthcare, the WatchOS 9 seems, on the one hand, to bridge the gaps of the missing features such as the sleep pattern and heart zone analyses and, on the other hand, to bring true innovation such as the drug interaction and AFib history features.

When Steve Jobs used to bring us breakthrough innovation, Tim Cook seems to be more on an incremental mode. What matters is for improvements to come to the consumers finally, and we do not doubt that the WatchOS 9 will make the best smartwatch even better. We can not wait to see what new sensors and features will be added to the Apple Watch Series 8, but we will start by installing the new OS and enjoying its benefits.

Whoop 4 vs Apple Watch 7: All you need to know to choose