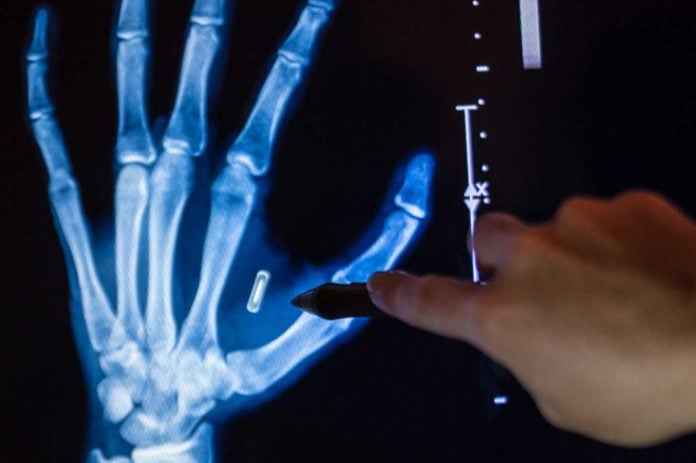 RFIF chips are not only for dogs. Star trek’s fans know it well. The half-human, half-machine Borgs discovered in the “Star Trek – Next Generation” gave birth to a generation of Bio-hacking aficionados.

By upgrading their bodies with technological parts, most biohackers’ goals are to open the doors to what will be Humanity 2.0 or “h+.” To them, we can and should use technology to control the future evolution of our species. Starting this journey towards transhumanism by implanting a simple RFID chip in our hands is an easy step. But are you ready for it? And do the benefits outweigh the potential risks to both our health and our privacy?

What are RFID chips anyway?

RFID stands for Radio Frequency Identification. The technology is not new and did not start in the Silicon Valley….but in the United-Kingdom during World War II.

Sir Robert Alexander Watson-Watt, the inventor of radar technology, developed a system he called the Identity Friend or Foe (IFF). A transmitter was attached to a plane. When hit by a signal coming from radars stations, a signal was sent back and the plane identified as friendly.

Just like this early invention, current RFID tags or chips involve two components: an interrogator or reader and a tag, including the information. A simple way to understand is to imagine a bar code scanner as the cashier. The information will be the label and the reader, the bar code reader itself.

During the 1950s and 1960s, Radio Tracking gained popularity in the business world. The first U.S. patent for an active RFID tag was granted to Mario W. Cardullo in 1973. The same year, an American entrepreneur, Charles Walton, developed a passive transponder to unlock doors.

RFID chips getting smaller and better

In the 1970s, RFID technology was even used to track trucks carrying nuclear material. The team at the heart of this technology founded a company specialized in automated toll systems.

From this moment, RFID tags became smaller, more powerful, and cheaper. They started to be used to identify in real-time anything from cows to dogs, and now human bodies. They are everywhere, in your credit card, metro card, ID card.

Near-Field Communication or NFC is short, uses the same technology and frequencies as RFID chips. The main difference is that NFC has short read range limitations. They have to be close to the reader, making them ideal for secure communication, contactless payment, or access control.

Transhumanism is closely linked to using technological progress for enhancing the human body and mind. Even though this philosophy aims to go beyond the human form’s limitations, body hacking and technological enhancements are the first steps towards an improved human.

David Asprey is considered the father of Biohacking, and it goes far beyond just implanting a chip in your hand. Biohacking is a philosophy of life and refers to the use of science, biology, and self-experimentation to take control of and upgrade your body, your mind, and your life.

Dave Asprey aims at hacking his own biology to live longer and healthier. He claims that he expects to live up to 180 years old and spent more than $1 million having his own stem cells injected, taking more than 100 daily supplements and vitamins, following a stick, bathing in infrared light, and using a hyperbaric chamber.

Bodyhacking is different and refers to the use of technology to improve your own body’s capabilities, and it all started as a research project in the UK.

Captain Cyborg as the father of bodyhacking

Kevin Warwick, also known as “Captain Cyborg,” a British engineer and Professor of Cybernetics, became famous for starting Project Cyborg, aiming at turning him into a cyborg. This original scientist is the true father of body modification. We can certainly acknowledge his courage and motivation when he started to implant electronics in his body more than 20 years ago when Netscape and Mosaic were the browsers of choice.

This project’s first step began on 24 August 1998 with the size of a grain of rice RFID transmitter implantation used to open doors, control lights, heaters, and computers. This first implant was 23 mm long and 3mm wide.

Professor Warwick did not end there, though, and went one step further. The second stage of his project involved implanting a Brain Gate sensor directly into his nervous system. Using an “external Gauntlet,” Kevin Warwick had the ability to control an external robot arm directly from the nerve impulses emitted by his median nerve.

Dangerous Things is a company based in Seattle, which was instrumental in the democratization of body enhancement. Up to recently, it was difficult both to buy human-compatible radio frequency identification rfid and the necessary syringes to implant them safely and painlessly….relatively painlessly.

Dangerous Things started to sell kits with various implantable kits, from chips to bio magnets or bio-compatible LEDs. For less than $170, you can buy a kit that will allow opening your house doors, starting a bike, or even logging into your computer.

Chips are tested and are considered safe, but the company specifically mentioned that the kits “have not been certified by any government agency for implantation or use inside the human body. Use at your own risk.” This doesn’t look very reassuring!

Sweden and the microchipping revolution

Sweden may well be the new Eldorado for body hacking. Jowan Österlund, a former body-piercer, has implanted more than 4,000 chips in Sweden. His company Biohax is pushing forward the future technologies that will pave the way to Ray Kurzweil’s singularity.

Hannes Sjöblad, the Epicenter’s Chief Disruption Officer, a technology-focused co-working space in Stockholm, and Osterlund developed new implants such as multi-colored LEDs light up under the skin. They also aim to develop implantable sensors that will replace our current wearables and provide numerous health readings.

To date, more than 5,000 Swedes live with a chip implanted in their body. This poses new legal problems mostly linked to privacy and the use of the information collected. In the United-States, the Seattle-based company Dangerous Things is famous for selling ready-to-use rfid and NFC chips kits.

My body, my data: How to deal with privacy issues?

Microchipping carries new privacy and labor-related potential issues. In the US, legislation is drafting legislation centered around implants. Companies may ask their employees to be chipped. In the United-States, seven states have or are planning to ban mandatory microchipping for employees.

In Europe, The General Data Protection Regulation or GDPR strictly regulates privacy issues and labor laws. In 2017, the European Parliament even released a report on human microchipping’s potential health and privacy issues. In the US, the legal canvas is currently being written to ensure the chips’ safety and keep personal data private. The rfid chip implant law intends to protect employees from the companies intending to chip their staff.

Transhumanism is just starting, and the road to and body-hacking still carries many unknowns, whether it be legal or health-related. To open the doors to human engineering and true body-hacking, RFID implants are the first steps towards transhumanism. Professor Warwick’s cyborg dream still has to come, but we do not doubt that microchipping carries many potential applications.

What is the future of Radio Frequency Identification?

Apart from the privacy issue, the main limiting factor for the wide adoption of these tag implants is that they may be fun but still not very useful daily. Yes, it is amusing to pay, activate your phone or unlock your phone with your hand, but the applications are still relatively limited.

In August 2017, the company 32market, pronounce Three Square Market, became the first company to offer microchips to its employees. The chips could be used to unlock lockers, doors, computers, or even pay at the cafeteria. Even though the media widely covered this initiative, numerous individual privacy organizations complained about the risk of tracking the employees and violating basic privacy rights.

32Market is a chipmaker and is still working on expanding the RFID chips to more “useful” applications such as memory care for the aging population, smart office/campus, law enforcement, and payment solutions. According to Patrick McMullan, 32Square CEO, Smart chips are part of the Smart City evolution. Patrick Mullan thinks, and we could not agree more that implanted diagnostics chips will provide doctors with medical data collected all day and night long in real-time.

Despite being seventy years old, implanting rfid chips in humans is still new. The benefits of this new technology appear limitless, but they will only be as good and efficient as the boundaries lawmakers will set to protect privacy and freedom.

Are digital tattoos the future of wearables?