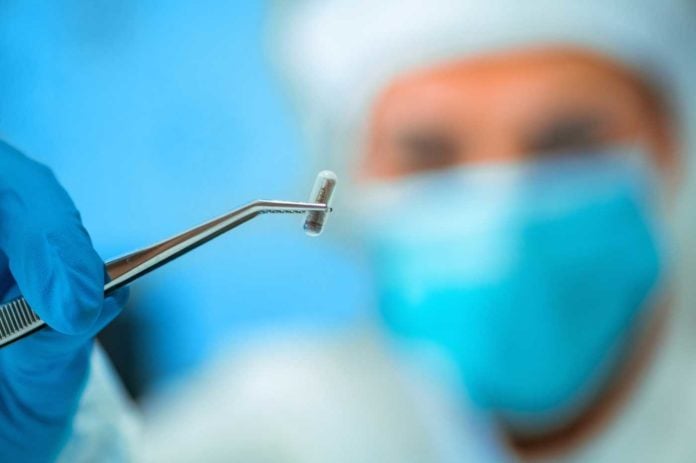 Radio Frequency Identification chips – RFID implants – derive from the progress made in radar technology during the second world war to differentiate between allies and Germans’ aircraft flying over the United Kingdom.

Recently, RFID chips were claimed to be used to track the recipients of the COVID-19 vaccine. Despite the claims of the conspiracy theorists’ fanatics, only the syringes had built-in microchips. The so-called ApiJect system was just implemented to track the syringe’s expiration date and ensure it was not counterfeit.

The public’s reaction to the possibility that RFID microchips will be used to spy on the population is very representative of the potential privacy concerns linked to RFID technology.

From the first one implanted in Dr. Kevin Warwick, also known as “Captain Cyborg,” to the thousands of microchip implants inserted into Swedes’ hands, chip implants are getting traction.

What can microchip implants be used for?

The uses of the size of a grain of rice chip implanted in the hand are seemingly endless. They are a convenient way to access your home, car, or office. Personal medical information can also be stored to let doctors or other medical staff access your medical record. In addition, it can be beneficial for patients suffering from chronic conditions such as epilepsy or diabetes.

In 2004, the US Food and Drug Administration (FDA) approved Applied Digital Systems microchip implants for storing medical information. In 2018, the FDA approved the use of medical implanted tags offering continuous monitoring to monitor blood glucose levels in diabetic patients.

Merging RFID technology with implantable diagnostic devices is certainly a breakthrough currently being studied by several companies. In addition, the FDA also approved the Eversense Continuous Glucose Monitoring sensor in 2018.

RFID tags can be combined with a GPS and follow pets, children, and even employees in real-time. Initially used for supply-chain purposes, the implanted microchips can be used as a metro pass in Sweeden.

The privacy concerns posed by rfid implants are not new. Already, fifteen years ago, the rfid microchip inserted in a Dutch passport was read more than ten meters away from the reader. However, as technology evolves, implants will store more and more sensitive information and increase hacking risks.

You will certainly not carry a GPS-compatible folder storing all your data, passwords, and keys when walking in the streets. It is exactly what you do with a microchip implant. On top of that, when used in the workplace, you potentially let your employer tracks your location in real-time. Our comparison may be a bit extreme but is somehow quite close to the current level of threat.

Privacy concerns related to personal information are one of the main concerns when it comes to microchips technology. Microchipping can provide access to medical records, bank account details and even let employers track employees. Therefore, it creates a real risk in the workplace to surrender individual liberties on the technology’s altar.

Implantation of the chip is just one way to collect data from an individual, but others exist and pose even more risks.

In 2007, the Electronic Monitoring & Surveillance Survey found that 66% of employers monitor internet connections and use them to fire employees in case of misuse.

The current pandemic has blurred the lines between the home and the workplace. Therefore, equilibrium has to be found to allow both employees and employers to preserve their privacy rights.

What are the benefits of an RFID chip implant law 2020?

More and more states are implementing laws to regulate the use of implanted microchips. But, how can they be used? What information can the employers collect?

In Wisconsin, the company Three Square Market (32M) was rendered famous when they implanted microchips in the hands of half of their staff. But, of course, it was done voluntarily as a convenient way for the technology company’s staff to use the copy machine, buy snacks in the break room, and open doors.

This example somehow poses the basis of the use of implanted microchips in the workplace. Of course, like with any new technology, legal boundaries have to be set. This is what the state senates are aiming to do.

In June 2020, the Michigan house of representatives passed a law banning implanted microchips at work.

The so-called “Microchip Protection Act,” or more plainly house bill No 5672, is just one of many others spreading among the United States.

What are the legal boundaries to staff microchipping?

More States are considering the implementation of such boundaries. For example, Iowa and Rhode Island legislatures are already planned, even though priorities have to be set in the current COVID-19 health crisis.

Since its implementation in Illinois in 2008, the number of biometric privacy lawsuits has dramatically increased.

With the rfid tags’ technology evolving monthly, no doubt that the laws will also evolve. The current ones restrict mandatory chipping, which is already a hard hurdle to cross, but we suspect that more specific regulations will have to be set to cope with the progress in the coming years.

Microchip implants and the Pandora box

RFID microchips offer many benefits. They will undoubtedly soon become part of our routine life to pay for a train ticket, share information with your doctor even enter your office or home. But, we are just looking at the tip of the technological iceberg.

Regulators are, by definition, following innovation and the advancement of society. However, the current laws to regulate rfid tags in the workplace are just a first step. Many more will be needed to set boundaries when opening the microchip’s Pandora box.

To know more about microchipping at work, we recommend that you read this excellent thesis by Dario A. Rodrigues, a J.D. candidate from the University of Iowa College of Law.

Biohacking: Are you ready for an RFID chip?