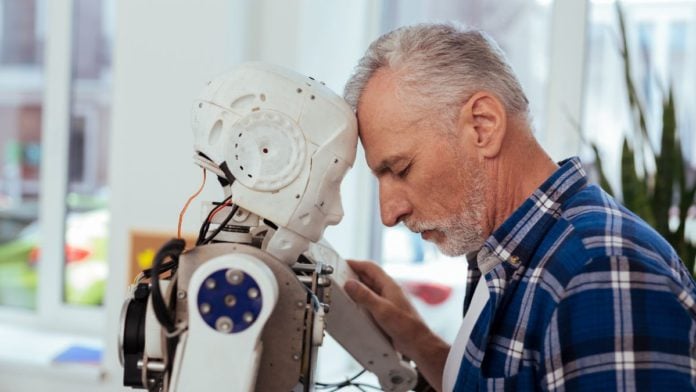 By 2040, one in five Americans will be over 65. In Japan, one-third of the 130 million population is already in their golden years.

Soon, elder care will be more than a weekly visit from a nurse. Companion robots are changing the way we care for our elderly and how they deal with loneliness.

This article discusses three major ways robots will impact society in the future: – providing companionship, – reducing caregiver burden, – encouraging independence. It also provides some safeguards for the use of companion robots, such as privacy and safety.

So, are Companion Robots the Future of Elderly Care? Let’s find out.

What are Companion Robots?

The elderly population is more at risk of facing social isolation. Loss of family members, of friends, or chronic diseases are contributing factors.

For the National Institute of Aging, loneliness is not only challenging psychologically. It also increases depression, dementia, and even heart disorders.

Paro as the first therapeutic robot

He developed a reassuring-looking robotic seal that helps patients suffering from cognitive disorders. In many clinical trials conducted worldwide, Paro proved to have the potential to reduce anxiety and stress.

More than a high-tech plush toy, Paro reacts to the behavior of the users. Thanks to its array of sensors, including tactile, light, audition, temperature, and posture detectors, the robot is aware of its environment and reacts accordingly.

Over the years, Paro proves to be invaluable in reducing the feeling of isolation. Patients treat it as a pet and enjoy its docile behavior. Love is the most powerful feeling in the world. Even the artificial affection provided by the robotic seal is enough to compensate for isolation.

In the US, the baby seal is even approved as a Class II medical device. Does it have a drawback? At $5,000, the cute baby seal is mainly reserved for institutions and hospitals.

Emotional robots ultimately deliver the same benefits as Animal Assisted Therapy (AAT). Real pets come with numerous constraints, such as potential allergic reactions, injuries to the patients, not to mention the need for regular walks and breaks. Robots are diligent companions with the potential of evoking emotional reactions.

Paro is billed as a non-medication antidepressant. For MIT Professor Sherry Turkle and the author of the best selling book “Alone Together: Why We Expect More from Technology, and Less from Each Other,” social robots trigger two key emotional responses:

Robots act as emotional substitutes: always there, ready to listen and to react within the limit of their synthetic brain.

In Japan, according to a survey by nursing care service provider Orix Living Corp, 80% of the elderly had positive feelings about receiving robotic care.

Social robots’ main benefits are all about sharing emotions. Emotional intelligence is at the crux of their potential success. The field is still vastly debated, but no doubt that numerous years of research, especially in their posture and movements, will be needed for them to become a valuable tool in the elderly therapeutic toolbox.

What are the challenges involved with SARs?

Any disruptive technology comes with challenges. Social robots carry what is known as Ethical, Legal, and Social (ELS) risks.

In 2020, Dr. Henrik SkaugSætra published a thoughtful article on “The foundations of a policy for the use of social robots in care.” He concluded that even if social robots could improve both objective and psychological factors, they carry the risk of reducing interaction between human carers and patients further. We could then end up in a vicious circle where the use of robots to reduce the psychological consequences due to the lack of human contact will ultimately reinforce them.

The design of the robots is not user-centric. It leads to the development of passive companions that lack the proactiveness of any meaningful relationships. Roboticists mostly choose this form of interaction to avoid breaking the illusion. In a study conducted at the University of Plymouth, researchers found that older people positively reacted to a speaking robot. Eye contact was also evaluated very positively. It appears that misalignment exists between the end-users and the people in charge of conceiving the machines.

Robots are helpful to monitor the symptoms of chronically ill patients remotely. Yet, as with any remote health sensors, privacy and safety of the data should be paramount and involve frequent software updates that may not be done appropriately.

Finally, Pr. Bisconti argues that far from creating a meaningful connexion, social robots carry the risk of creating a hallucinatory reality for already cognitively weaken patients. Thus, it will ultimately be very detrimental for older adults. His argument is valid and poses the basis of research on how “humans feel about robots that feel.” Louisa Hall addressed this exciting topic in the MIT Technology Review, but so far, numerous unresolved questions exist.

Most social robots aim at filling a void in the life of their owners. For example, Aibo, the robotic puppy developed by Sony, was and is still a big success. Despite its price close to $2,000, Sony sold more than 15,000 units of its playful mechanical dog.

Below, we will concentrate on what the future of robots will be. Interestingly, most of them are far from the anthropomorphic image carried by Hollywood Sci-Fi movies.

Without entering into the psychological reasons behind that, engineers try to avoid what is known as the “uncanny valley” and not trigger uneasiness among the users. Hence, the “out of this world” design of the new models.

Lovot is the brainchild of Kaname Hayashi, who worked on Pepper, the famous robot developed by Soft-Bank to serve as a customer assistant and even a fitness instructor for the elderly. Lovot is the combination of “Love” and “Robot,” which is quite amusing when remembering that the meaning of robot is “forced labor.” Lovot is fully aware of its environment and relies on sophisticated LIDAR technologies and Artificial Intelligence algorithms.

More than a companion robot, Pillo is a health assistant with the ability to dispense pills, check adherence and even call the doctor or the pharmacists. Pillo is a social robot that carries another potential risk linked to robotic-medical errors.

Moflin is a Kickstarter Japanese project that follows the path of Paro. You may remember the tribbles in the first Star Trek season. Moflin is a furry ball with the ability to react to its environment. It conveys emotions and aims at becoming the family AI pet.

Imagine a furry cushion with a tail. Qoobo aims to be a therapeutic robot to reduce stress in patients who have dementia and the whole family. The movements of the tails have been carefully designed to mimic those of a real animal and promote relaxation. So are you ready for tail therapy?

Companion robots undoubtedly carry a lot of potential for elderly care, but they are also the mirror of the decline of human relationships in the elderly population. Thus, filling the generation gaps with technology will remain an imperfect substitute.

Yet, with isolation becoming the disease of the 21st century, an artificial presence may be better than no presence at all.