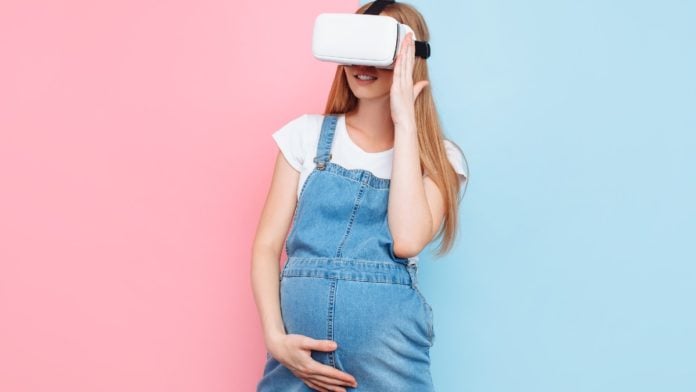 In a previous article, we described how Virtual Reality could be used for pain management. Nobody will deny that delivering a baby is an exhilarating but also utterly painful experience.

In this article, we will walk you through the use of Virtual Reality environments to minimize pain, accelerate time and diminish labor pain.

It all started with Elisabeth’s birth

November 2016 was an eventful month for Erin Martucci from New York. Not only did the 43 years old mother gave birth to her second child, but she became the first to deliver her baby while watching computer-generated relaxing scenes.

The story of Erin became rapidly viral and may well give us a hint of what childbirth will be like in the not-so-distant future. Instead of a peridural, the doctor gave Erin a Headset that transported her in the relaxing beach-side virtual environment designed by the company AppliedVR.

Not only did Erin delivered painlessly while focusing on the virtual campfire, but the experience was also fast as Virtual Reality carries the ability to accelerate the perception of time.

Have you noticed that it is possible to follow and interact with a single conversation even when surrounded by numerous chatty people? In psychology, this is referred to as the “cocktail party effect,” and VR relies on the same principle of inattentional blindness to distract the brain from the pain.

Attention is critical to perception, audition, vision, and all the other senses. By distracting the brain, VR closes the doors of perception and significantly decreases pain during Childbirth or any other medical procedures.

As mentioned by Drs. Gazzaley and Rosen, in their award-winning Neuroscience book, The Distracted Mind (check on Amazon), our brain is not good at multitasking. We have to focus on something to be truly effective. It goes the same way with Childbirth.

Interestingly, our brain contains more neurons devoted to visual processing than to the four other senses (smell, taste, hearing, and touch). Thus, a Virtual Environment projecting a 360 degrees virtual scenery is a perfect way to distract our other senses and limit nociception.

No doubt that VR relaxing apps. or even VR games are immersive. But, even knowing they are just paved with illusion, they have the power to initiate autonomic reflexes.

Have you ever tried to walk on a scaffold in a virtual reality environment and felt your palms sweating? I did. The brain is an incredibly complex organ, but fooling it is no so complex.

For women in labor, this is a blessing, even though the illusion can be broken relatively easily. Used as a co-modality, VR is a safe way to limit painful inputs. However, it doesn’t hurt to have a peridural injection close by if the patient is not receptive enough.

In 2020, Dr. Melissa Wong from the Cedar-Sinai in Los Angeles published the results of a scientifically robust Randomized Control Trial to assess the potential benefits of VR for pain-management of labor pains? From March 2018 to February 2019, 40 women already in labor and experiencing pain were assigned either in the no-intervention or VR arm. They were then asked to grade their pain level using a standardized scale.

Using just a VR Google Headset and VR blossoming tree, ocean waves, and crackling campfire accompanied by meditative auditory guidance specific to pregnancy and laboring women scenario, the results were unambiguous. When using the Headset for 30 mins, the VR Group experienced a significant pain reduction, while pain continued to increase in the control group.

Sadrieh Hajesmaeel-Gohari recently published a meta-analysis of the benefits of VR while in labor. Out of the 1,355 articles reviewed, he selected nine that relied on robust clinical trial criteria.

When aalysing the articles, some of the factors that influenced the success of the protocol appeared:

What is the future of VR for Childbirth?

Just five years have passed since Dr. Anderson offered Erin Martucci the possibility to experience the first VR-assisted birth. To date, thousands of women have already benefitted from the technology.

More than a trend, Virtual Reality proves beneficial for managing pain in general and labor pain in particular. The hardware is getting more and more readily available. As technology evolves, the price point decreases. The Neuroscientific bases are also better understood, and protocols are being defined to optimize the patient experience.

Even for procedures known to be painful, such as episiotomy repair, researchers proved that virtual reality had the ability to minimize anxiety and pain.

In a world where technology is becoming ubiquitous, the use of Virtual Reality for Childbirth may soon be the norm.