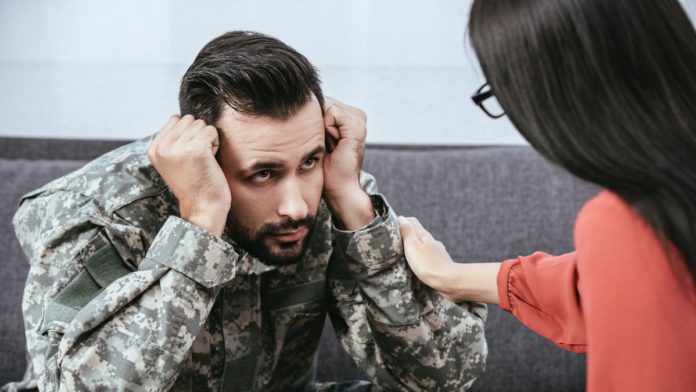 According to the American Psychiatric Association (APA), one out of 11 people will suffer from Post-Traumatic Stress Disorders (PTSD) in their lifetime. In 1992, Weiss et al. estimated the number of Vietnam veterans suffering from combat-related stress to be over 830,000.

In an article published in 2002, Rothbaum et al. already described the benefits of what was known as Virtual Reality Exposure (VRE) for veterans showing a strong emotional response to the sound of helicopters.

Even with the relatively basic technology available twenty years ago, virtual Reality appeared to show promises for treating phobias and stress.

This article will describe the current benefits of virtual environments and why they may gradually become part of routine treatments for PTSD and anxiety-related disorders.

What is Exposure Therapy?

APA describes exposure therapy as a psychological treatment during which patients are safely exposed to the stimuli they fear and avoid. Just as allergies can be minimized with small quantities of allergens, exposure therapy’s primary goal is to disincentivize the brain’s emotional response.

The therapeutic process can involve two diametrically opposite methods. The first one involves a gradual exposure of the patients to fearful stimuli. The second one, flooding, aims at starting the treatment with the most challenging stimuli. Interestingly, both approaches are equally effective even though the graded approach is more comfortable for the patients.

Despite its evident success in lowering anxiety and fear, it took time for exposure therapy to become routine practice. Pr. Kaplan, in 2011, wrote in an article published in the Psychiatric Times that even if patients had a preference for such treatment modality, only a limited number of therapists used it as the first line of treatment.

How does Virtual Reality help in treating PTSD?

The use of fully immersive, 3-D virtual environments allows helping the patients confront their fear in a realistic way while being completely safe. In addition, the use of smell and sound add a new dimension to the realism of the experience.

The brain can reprogram itself constantly using various chemical substances and receptors. Thus, neuroplasticity is at the core of the therapeutic benefits of VR treatments.

Four theories underly the effects: Habituation, extinction, emotional processing, and self-efficacy. Without entering into the details of each, the principles are that patients will gradually get used to the fearful stimuli and gradually change how the stimuli are interpreted and associated.

For example, the sound of a helicopter will no longer be considered potentially harmful but as a way to explore new beautiful landscapes. In a nutshell, Virtual Reality will change how the brain copes with specific input.

Why is Virtual Reality still not used routinely to treat PTSD?

Dr. Boeldt, from the National Mental Health Innovation Center in Aurora, Colorado, analyzed why VR therapy was still lagging behind pharmacological therapies despite all its potential.

One of the reasons relates to the fear of fear. As a result, patients may refuse to be engaged and confront their most feared stimuli.

For the therapist, one of the reservations may be that such virtual experiences require a dedicated set-up and often need to be customized to the specific fears of the patients. Technology is now widely available, but the need for individual experiences may be considered too complex to recreate. Hence, the use of more standard therapeutic alternatives.

A third reservation is linked to the fear by the therapist that exposing patients to their most feared stimuli will distress them even more. But, again, the use of gradual therapeutic environments is an answer to this problem. Still, the environment has to be finely tuned and controlled by the therapist, which imposes a great deal of time and customization.

Finally, the last reservation may be linked to the clinic policy when using an in-vivo virtual environment. The lack of specific training for such innovative ways also limits its wide dissemination and restricts its use to research hospitals or specialized centers.

Since 2011, The University of Central Florida (UCF) has developed a state-of-the-art multisensorial virtual environment with the possibility to include not only sight but also sounds and smells. In addition, the environments are uniquely customized to meet the needs of the individual patients offering a uniquely crafted and most effective therapy.

The combination of multisensorial inputs helps patients cope with their trauma, put it into perspective, and regain control of their life. UCF RESTORES system was partly funded by a $3 million grant from the US Department of Defense and is ongoing a clinical trial to make it available nationwide.

The results offered by combining various sensorial modalities proved very effective. After just three weeks of intensive therapy, more than 2/3 of the treated veterans or first responders had improved to such an extent that they did not qualify and justified treatment for PTSD.

What is the future of Virtual Reality Exposure Therapies (VRET)?

VRET proved to be highly effective but is still underused. However, it may change soon by better controlling the environment and stimuli to which patients are exposed.

Researchers are now using wearable sensors to understand better how patients respond to the feared stimuli presented in VR and adapt the environment to their physiological responses.

Electrodermal Activity Sensors (EDA), Heart Rate Monitoring, and eye-tracking devices data are used to fine-tune the level of exposure of the patients in real-time. Hence, the level of stimuli will be calibrated to induce a therapeutic response.

Furthermore, this multi-sensorial modality will allow limiting the risks of enhancing the stress already experienced by the patients.

XRHealth is undoubtedly one of the most active companies in using virtual therapies in a wide variety of cognitive disorders. The environments can be used for Physical, Neurological, or Behavioral disorders. Combining a headset and various FDA-registered software, XRHealth is on a path to change the use of virtual reality.

iMotions platform is dedicated to using VR to treat various mental disorders such as anxiety, PTSD, or even addiction. Working in collaboration with the University of Copenhagen, the company makes the most of biofeedback sensors to provide a personalized experience to each patient. Hence, enhancing the therapeutic potential of VRET while limiting the negative consequences.

Psious is a Spanish company that makes the most of electrodermal activity sensors to customize the virtual experience. The platform is dedicated to therapists that can control how the patients respond in real-time. With a catalog of 70 virtual environments, Psious can treat various disorders from anxiety, eating disorders to OCD and PTSD. Patients also can use their phones to benefit from the therapeutic protocols without leaving their homes.

Virtual Reality has the potential to change how people deal with stress. The technology is now readily available, and numerous prestigious universities are currently developing platforms that will change how patients deal with traumatic events and PTSD. The use of neurofeedback allows to tailor the stimuli to individual responses and to provide proven therapeutic benefits.

We hope that therapists will be trained in using such technology and that soon traumatic experiences will not jeopardize the future lives of so many.