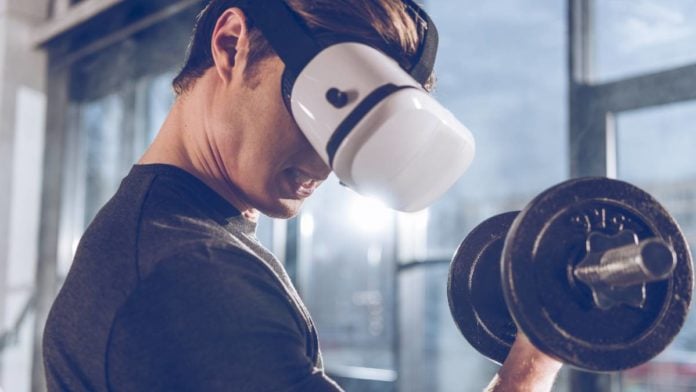 Losing weight is as easy as it is difficult. Being currently in the middle of my journey to lose 40 pounds, I can testify that this can be difficult. But we all know how to succeed: Exercise more and slow down on snacks and junk food.

Nowadays, we have plenty of technology to help us reach our health and fitness goals. For example, the Lumen metabolism Tracker helps define if your body is mostly burning fat or carbohydrates and adapt your meals accordingly. Even At-home Genetic Tests and nutrigenomics became part of nutritionists’ tool kit.

The last technology that received a lot of interest in the last decade to favor weight loss is Virtual Reality. Interestingly, VR can act at different psychological and physiological levels to help lose weight and not regain it!

In this article, we will analyze how a simple VR headset can dramatically change the ways people can lose fat, gain strength, and tighten their belts. Welcome to the Weight Watcher of the 21st century: The VR Weight Loss program!

VR as an efficient Fitness Tool for losing weight

Going to the gym regularly can be difficult sometimes. According to Statista, the primary motivation for 41% of US gym members is to lose weight.

Unfortunately, the lack of time or decrease in willpower will lead to striking attrition rates. Within six months of joining a gym, half of all new members quit. On top of that, 82 percent of gym memberships are utilized less than once a week, and 63 percent go unused entirely.

Working out at home has evolved a lot in recent years. It is now possible to benefit from live training sessions streamed live on your TV while the instructor can monitor your progress and even advise. Companies such as Obe Fitness offers such services with great success.

Virtual Reality is the ultimate immersive experience and has the potential to bring numerous health benefits to any fitness program, including:

VR workout and VR fitness exercises are effective ways to enjoy exercising and ultimately lose weight. Recently, a German Lady reported having lost 40 pounds by playing a simple VR boxing game that helped her lose up to 1,000 calories per day.

The last element to consider relates to the costs of either a Gym Membership or a VR Headset. The Oculus Quest 2 comes at a price tag of $299 (Check on Amazon.) Even if the games have to be included, the investment is quickly covered compared to the average monthly costs of $59 of gym membership in the US.

An institute dedicated to VR and Fitness

In 2017, a team of researchers and technology entrepreneurs founded the Virtual Reality Institute of Health and Exercise to understand better the calorie impact of VR experiences on the human body.

The Institute maintains a list of the number of calories burned while playing various VR games or exercising in various environments.

The methodologies used to assess the number of calories are scientifically rigorous and rely on measuring oxygen consumption with a metabolic cart while playing or exercising in VR.

Based on their analyses, a VR Fitness game or VR app gains a real scientific rationale that main change the way VR technology is perceived.

Numerous companies have realized the benefits of such an approach and are developing specific environments devoted to helping lose weight and improve Fitness.

Viro is one of them. In just a couple of years, the Polish company developed various solutions for fitness clubs to improve retention rate or home usage.

Viro Race VR is dedicated to fitness clubs and offers the possibility to practice cycling, rowing, or stepping on physical machines while being immersed in a virtual environment that contributes to the gamification of the exercise. The experience is fully immersive and provides numerous performance tracking metrics and training modes.

Viro Move Club is dedicated to helping users burn calories while playing at home. The heart rate is also monitored during these swords or shooting training simulations.

The German company developed specific environments making the most of compatible hardware. Their solution HoloFit connect to home gym equipment such as rowing machines or other types of fitness machines. For example, rowing in Virtual Reality adds fun to a repetitive exercise.

Numerous other companies such as Black Box VR, Icaros, or VirZOOM are also working on various approaches or technologies to reinvent what will be the gym of the future.

VR for the treatment of eating disorders

Eating disorders are not only related to weight gain. An excessive weight gain or weight loss can be the signs of the existence of underlying psychological issues.

Eating disorders can be linked to a distorted perception of one’s body weight or shape. Cognitive Behavioral Therapy is an approach used by therapists to realign the patients’ beliefs with their actual weight, shape, and appearance.

For patients suffering from Anorexia Nervosa, a very severe eating disorder, VR therapeutic protocols during which the patients were asked to eat a meal in Virtual Reality proved helpful in reestablishing normal relationships with food.

The principles are the same as those used for treating patients who have PTSD. A VR dinner is becoming the first safe step to reestablish positive habits.

The therapeutic uses of Virtual Reality have dramatically expanded in the last decades. Thanks to the advancements of technology. In some hospitals, women can deliver watching a virtual environment that will decrease perceived pain and give the illusion that time is flowing faster.

With the dramatic rise of obesity and Type II diabetes, the world currently faces, exercising and losing weight in VR is a fun, motivating, and effective alternative to calorie-restrictive diets. However, losing weight is difficult and heavily relies on personal motivation. By combining different approaches, VR technology proved effective in helping people reconcile themselves with their body image and achieve the body shape they look for.

More than a purely aesthetic, most people need to lose weight for medical reasons. To this end, VR weight loss and Fitness are a great way to bring a touch of excitement in a weight loss journey that is, let’s admit it, quite dull.

Finally, exercising while playing in VR is the perfect excuse when your partner complains about your excessive gaming habits.