Home Insights Genomics What can you learn from telomere length testing? 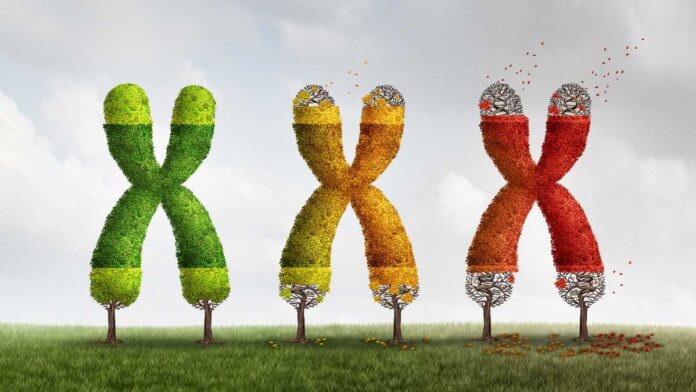 Telomere length measurements are now available as at-home tests. With the rapid increase of DNA testing companies, it is now possible to have access to tests reserved for healthcare professionals and hospitals just a couple of years ago. Measuring the length of telomeres is even available for dogs if you wish to better understand the actual genetic age of your pet.

This article will walk you through the world of telomere length testing. What can be learned from measuring their length? What are the at-home test available? Is the science underlying them sound? How much do they cost? What can you learn from testing the length of your telomeres? Some of the critical questions are their legitimacy, reliability, and potential benefits for staying healthy.

Let’s start by defining what telomeres are and why they matter.

Telomeres are repetitive sequences of nucleotides (DNA) that cap the ends of chromosomes. They protect our DNA from degradation and end up protecting us against aging. Telomeres shorten with each cell division because the enzyme telomerase cannot add new repeats to the ends of chromosomes. The shorter the telomeres, the more cells divide before reaching replicative senescence or death.

Telomere shortening has been studied extensively over the past decades. However, the function of telomeres to protect DNA from degradation was primarily identified in the 1980s, with Elizabeth Blackburn and Jack Szostak leading the research. Finding links between cell aging, cancer, and telomerase, the enzyme responsible for building the telomeres, have numerous implications for delaying the DNA, cells, and ultimately the whole body aging process. Such implications are so fundamental that Blackburn and Szostak received the Nobel Prize in Physiology and Medicine 2009 for their precursor works on telomeres.

Why does it matter to know how long telomeres are?

The length of telomeres has been shown to correlate with longevity. People who live longer tend to have longer telomeres than those who die younger.

The fact that telomeres get shorter over time means that we lose some of our cells every time we grow old. This explains why people who live longer also tend to have fewer diseases. It also explains why older people often look healthier than young ones.

In humans, the average lifespan is 80 years. However, this varies between countries and populations. In Japan, where life expectancy is 84. So are the telomeres of the Japanese population longer than in the rest of the world? It seems so.

In 2011, Shirasawa and Shiga from the Juntendo University, Graduate School of Medicine Department of Aging Control Medicine studied individuals living in one of Nagano Prefecture’s villages with the longest longevity. According to their results, the village’s residents had telomere lengths that were substantially longer than those of people living in other regions of Japan. Their findings imply that telomeres could be used as a helpful biomarker for longevity and a healthy lifespan.

What is a good telomere length?

There is no real good or bad telomere length, and the answer is a matter of percentiles. The average person has around 5,000 base pairs of telomeric DNA at each end of a chromosome. A healthy cell will have between 10,000 and 15,000 bp. If your telomeres are shorter than this range, then you may be experiencing cellular aging. This means that your cells are dying off quicker than they should.

Telomere length fluctuates between around 8,000 and 13,000 “base pairs” (DNA letters) in length in newborns, and it decreases by approximately 20-40 base pairs every year after that. Telomeres are also longer in women than in males, which may be one of the reasons to explain the average longer longevity of women.

Telomere length changes over time, and people who exercise regularly tend to have longer telomeres than those who don’t. People who eat more red meat tend to have shorter telomeres than vegetarians. Some of the telomere length testing companies promote the use of specific diets to reduce the shortening of the telomeres. These approaches are still very speculative and should be considered with caution.

How do Companies test for telomere length?

Most tests will require a blood sample, hence the need for medical supervision and a phlebologist. Telomere length measurement methods range from qPCR to FISH methodologies. In addition, some companies such as RepeatDx will analyze human telomeres lengths in up to 6 types of human cells even though most tests will only focus on one.

Even though telomere testing is still mainly being used by physicians to diagnose telomere linked diseases such as dyskeratosis congenital, aplastic anemia, myelodysplasia, acute myeloid leukemia, and pulmonary fibrosis, to cite a few, the general public can also have access to such tests more for informative purposes than anything else in our opinion.

Below is a list of the companies we know are testing for cellular senescence and offer telomere length analysis. However, we do not endorse any of them and recommend that you check with your doctor if you are willing to know more about your senescent cells and telomere shortening rate.

The Spanish-based company themselves the world leader in the field of telomeres. They offer a range of tests to assess cell senescence. According to Life Length, they are the only biotech firm in the world that is capable of measuring telomeres at the chromosomal level individually using its Telomere Analysis Technology® (TAT®).

The company collaborate with numerous hospitals, Contract Research Organizations, or companies to provide in vitro and clinical studies to Biotech/Pharma, Veterinary, Cosmetics, and Nutraceuticals firms. Founded in 2010 by seasoned business and science veterans, Life Length have attracted close to 6 million dollars over the years.

With offices in Bensalem, Pennsylvania, Life Length is a clinical laboratory that has been accredited by the United States Federal Government through the Clinical Laboratory Improvement Amendments (CLIA) and is also IS0 15189 accredited.

On top of their clinical and research projects, Life Length offer telomere length testing to doctors and individuals. For $480, the company offer to book an appointment with a phlebotomist that will collect a blood sample, then analyze using Life Length proprietary TAT® technology, as well as a consultation with a doctor that will guide users through their results.

RepeatDx was founded in Vancouver, Canada, and rely on Flow FISH technology to identify individuals who have different types of hereditary depletion of telomerase and carriers of mutations in the genes that encode telomerase.

The laboratory is CLIA certified and only accept orders from registered physicians. RepeatDx claim they are the only company in the world with the ability to analyze the telomere length of six different types of cells (granulocytes, lymphocytes, B-cells, naïve and memory T-cells, and NK cells).

The company offer either the analysis of the whole six types or just of two types (lymphocytes, granulocytes) for close to $1,000 for the 6-panel assay and the written evaluation of the test results by a hematopathologist.

For those interested in knowing more about how telomeres impact health and diseases, the RepeatDx blog includes numerous informative videos that we highly recommend.

The Texas-based company does not specialize only in assessing the telomere length, and its flagship diagnostic test focuses on measuring 31 specific micronutrients. The principle is that correcting potential deficiencies in vitamins, minerals, amino acids, antioxidants, and metabolites can help slow down aging and stay healthy.

Their telomere length analysis is reserved for healthcare professionals. SpectraCell telomere test relies on PCR analysis to define the average telomere length of only one cell type (leucocytes). Less extensive than RepeatDx, the test at around $300 is more affordable.

The results are simple to understand and focus on the aging effect of the telomeres more than their medical components.

Measuring the length of the telomeres is not opening the door to the fountain of youth. Therefore, direct To Consumer tests that promise to expand your life span should be considered cautiously.

In 2018, Dr. Lewis published an interesting article entitled “Telomere Testing: Science or Snake Oil?” that we invite you to read when considering testing longevity via telomere length testing. Even without denying the link between telomeres and some diseases, Dr. Lewis concluded that “Telomere length testing is “molecular palm reading,” a modern version of snake oil” that could cause unnecessary anxiety.