Home Reviews At-Home DNA What Can A Genetic Test Tell About Your Dog Genetic Age?  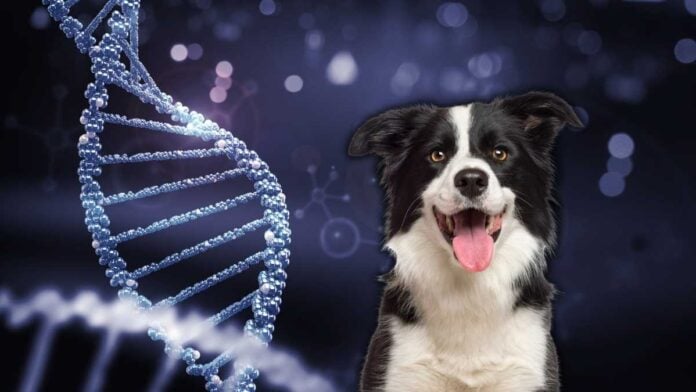 A new type of dog DNA test is now available: the dog age test. And these types of tests are what we are going to be looking at today. What are the purposes of a dog age test? How do they work? Is the process valid and something that can be applied to dogs? Finally, we’ll show you some of the popular dog age tests that are currently on the market.

What is the science behind genetic age testing for dogs?

The first thing we need to establish is the difference between biological age, chronological age, and genetic age.

Chronological age is calculated from the dog’s date of birth. If you are lucky enough to know the exact date on which your dog was born, then this is of course a reliable and accurate measure of their age.

If, however, you have picked your dog up from a shelter, and in particular, for older dogs, it can be very difficult to know how old they are. Biological age is something that is used in veterinary medicine as an educated guess for dog age. It is calculated using measures such as teeth, eyes, and fur color. These can be compared against markers that show the average age at which that breed on average develops the markers.

Biological age for dogs is usually a guess, albeit one that is based on sound reasoning, and it isn’t as accurate as some people may like. It is also much more accurate for a purebred dog than it is for a mixed breed dog because it is hard to know the baseline for these markers for a breed mix.

This brings us to the genetic age. You can think of genetic age as a subset of biological age, and one that looks at more than just external age markers. A genetic age test looks underneath the surface at your dog’s DNA. It can be very useful for a pet owner to determine the age of a rescued dog but it can also help to see how healthy a dog is.

The same is true for dogs. A genetic age test can tell you if your dog is aging more rapidly than their chronological age suggests, which can help you to make any necessary lifestyle changes or prepare for health conditions that may be coming sooner than you thought.

What does a dog genetic age test look for?

The way that genetic age is calculated, both for humans and for dogs, is that it looks at the length of telomeres. Telomeres are located at the ends of our chromosomes and they play a vital protective function of protecting the genome from unnecessary recombination and repair.

A small portion of telomere is lost every time a cell divides. And once the telomere gets short enough, it triggers cell death. So measuring the length of telomeres can be an accurate measure of genetic age and predicted lifespan.

Importantly, telomere length isn’t completely predetermined from birth. The rate of telomere loss can be affected both positively and negatively by lifestyle differences. This is either due to the lifestyle behaviors’ effect on genetic material more generally, or to their specific effect on the telomeres.

This is why genetic age can often differ greatly from chronological age. Being able to test genetic age can be an important window into your dog’s health, as well as a way of determining how old they are if this isn’t known.

But can this DNA testing be applied to dogs?

While humans and dogs are quite similar in many ways (it even appears that we have affected each other’s evolution!), there are still some major biological differences between us and our canine friends.

Thankfully, that doesn’t seem to be the case when it comes to telomeres. Scientific studies have determined that dog telomere biology is very similar to humans, so the reasoning behind the genetic age testing can be applied to both.

With that being said, unlike in humans, telomere length and life expectancy are highly variable across dog breeds. Larger dogs tend to have a shorter life expectancy than smaller dogs, and this is reflected in their telomere length. These differences mean that there is no gold standard against which to compare telomere length, so companies rely on large databases with dogs of a similar breed/size.

How is a dog DNA test conducted?

As we mentioned, there is now a wide range of companies that offer dog DNA testing. If you have ever sent a DNA sample off to test your own health and ancestry, you will be familiar with the process, and it is the same for dogs.

When you buy your dog’s DNA test, you will receive a DNA kit in the mail. In the DNA kit, you will usually find a cotton swab and a return envelope. Just like with human at-home DNA testing, all you will need to do is take a buccal swab sample from the inside cheek of your dog’s mouth, pop it in the return envelope and send the sample back to the company for testing.

How do these tests work?

Once you have collected your dog’s DNA sample and sent it off to the company, they will conduct their analysis on it. The situation is slightly more complicated for dogs than it is for humans, however, and you will also need to provide the company with some additional information.

Most people know that different dog breeds tend to have different lifespans. Generally speaking, the larger the dog breed, the shorter their life expectancy. Because of this, you will usually be asked to send information about your dog’s size and weight along with their DNA sample.

The company will then perform their telomere analysis and compare the length of your dog’s telomeres to a database of thousands of dogs of the same weight and size. From this, they will be able to determine your dog’s genetic age.

What can a dog owner learn from a dog age test?

There are two key pieces of information that you can learn from a canine genetic age test for your dog.

First, you can determine the age of the dog if that isn’t known. We have mentioned that the canine genetic age test result will be affected by lifestyle as well as genetics, so the genetic age may not exactly match what their chronological age would be. Working with someone from veterinary medicine who can look at other markers as well as genetics will help you to get the fullest picture possible of your dog’s age.

Lifestyle factors can both speed up the rate of telomere loss and slow it down, so this information can help you to plan how to slow down the process. For example, obesity is one factor that has been shown to reduce telomere length. Whereas increased exercise can slow down telomere loss, as can dietary changes such as increased fiber and antioxidants. Intermittent fasting can help to preserve telomeres, due to less oxidative stress, so having clear set meal times can also help.

Knowing the genetic age of your dog can also help you to prepare for any health conditions that could be coming sooner rather than later. As the genetic age increases, so does the health risk, so keeping up to date with vet appointments and checks becomes more important.

What are the available tests for determining your dog’s genetic age? 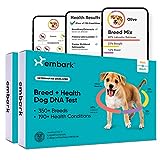 Easy DNA doesn’t specialize just in dog DNA testing. They are also a popular choice for a wide variety of human DNA tests. As with other genetic age tests, Easy DNA compares the length of the telomeres to a database to determine the age.

The genetic age test is only available as part of the Premium Package. This includes a dog allergy test, dog breed test, and dog age test, and costs $195. If you are rescuing a dog, finding out their breed mix can be an important piece of information alongside their genetic age. But if you already know the dog breed, this information might not be useful to you.

DNA My Dog genetic age testing uses the same telomere method as Easy DNA. The test results give you a helpful visual of your dog’s chronological age (if known) compared to the genetic age to help you determine if your dog has any age-related health risk. It will also help you to determine the age of your dog if it isn’t known.

As with Easy DNA, you can’t order the genetic age test alone. Instead, it comes as a bundle with a breed ID test, for $99.

Embark provide a wide range of dog DNA tests. As with the other companies listed, you can’t order a genetic age test on its own. And how they analyze the genetic age isn’t clear, although presumably, they use the same telomere method as other companies.

To receive genetic age results, you have to buy one of the following:

You won’t get genetic age testing from the standard $99 Breed Identification Test.

IBDNA provide a wide range of DNA tests, not just for dogs but for humans too. Their genetic dog age test uses telomere testing compared against a database. Unlike the other companies listed, you can buy the genetic age test alone for $58 or you can have it bundled in with a breed identification test for $99.

If you choose to have the age test completed alone, IBDNA will ask you to send them information about your dog’s breed, size, and weight to help them compare to the database.

DNA testing for humans, let alone dogs, used to be a novelty. The market has changed completely, however, in just a few years and now DNA tests are a mass-market product. Because of this, companies are looking for more specific niches in which to differentiate themselves.

DNA age testing is one such niche. The information that a pet owner gets from the testing can be useful if there is an obvious mismatch between genetic and chronological age, and it can be a helpful piece of information for rescue dogs. The results are highly dependent on the breed/weight of the dog, so for many mixed breeds, the results may not be accurate.