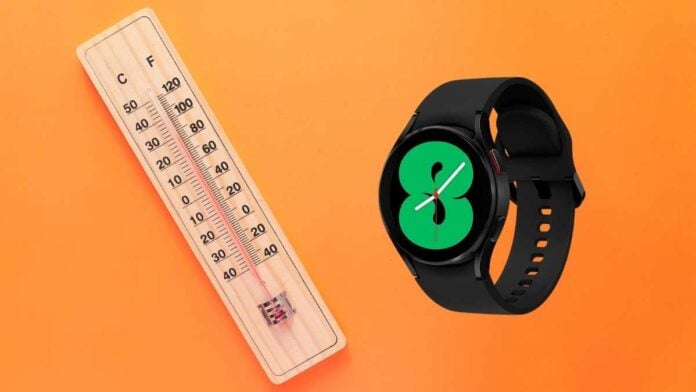 According to Korea IT News, the new Samsung Galaxy Watch 5 may include a built-in body thermometer. Expected to be released in August 2022, the new Galaxy Watch 5 may be one step away from becoming the ultimate health watch. In recent years, Apple, Fitbit, and Samsung made tremendous progress in integrating health tracking features.

The Apple Watch Series 7 also includes an electrocardiogram, heart monitoring, blood oxygen saturation. Despite the numerous sensors available, the Apple Watch still doesn’t come with body temperature detection. While the Samsung Galaxy Watch 4 also comes with ECG and Stress sensors, the watch also adds algorithms to monitor blood pressure and is one step closer to being the ultimate health watch. The addition of a temperature sensor to the Watch 5 may bring the Samsung Galaxy Watch 5 one step closer to becoming the ultimate health smartwatch.

Measuring body temperature with a watch is not as trivial as it may seem. The skin is submitted to external weather or temperatures. Fitbit solved this issue by measuring the skin temperature while asleep and presenting it as a range. Even if it will not show the “real” temperature, measuring the variations is informative for tracking temperature changes.

Samsung appear to have been one step further in providing objective and accurate measurements. Supposedly, the company has developed a system capable of measuring body temperature with the most significant degree of accuracy conceivable. In addition, a thermometer feature for the new wireless earphone Buds is also being considered for inclusion in the product.

The Galaxy Buds prototype has been finished, and the company is currently contemplating a release date. Using infrared wavelengths released from the eardrum and sent to wireless headphones, Samsung Electronics is developing a system that will allow it to assess the body temperature.

Being able to provide reliable measurements is critical for broad adoption. So even though Amazfit smartwatches and Mobvoi Ticwatch GTH come with temperature measurement features, we can expect more accuracy from Samsung’s new technologies. We look forward to testing it.