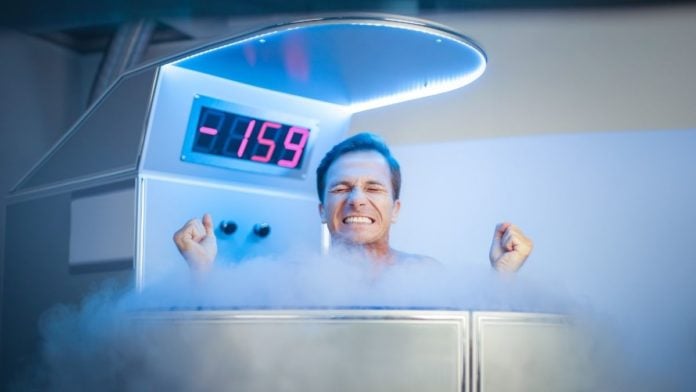 Thomas Jefferson was said to have enjoyed the health benefits of a cold water foot bath every morning throughout his life. Likewise, cooling strategies have been used for centuries to limit fever and improve performances or improve recovery.

Initially developed to treat patients suffering from rheumatism, cryotherapy aims to use ultra-low temperature enclosures, between negative 200–300° Fahrenheit, to stimulate cutaneous thermo-receptors, which will induce a cascade of hormonal and metabolic reactions.

For athletes, cryo chambers relying on liquid nitrogen started to be used as early as the Moscow Olympic Games, back in 1980, to promote recovery and alleviate muscle pain.

Nowadays, cryotherapy chambers can be found in beauty spas, medical centers, and even fitness clubs. But is it really safe to stay 2 mins while being surrounded by vapors of ultra low-temperature nitrogen, and what are the real benefits?

What happens to the body when exposed to ultra-low temperatures?

Before diving deeper into the physiological and psychological benefits of cryotherapy, let’s check the effects on the body when exposed to -250° Fahrenheit.

Initially, the skin temperature will be dramatically reduced, followed by deeper tissues and, finally, the core body temperature. By decreasing the temperature of the human tissues, a decrease in the metabolism of the cells is observed. The same process is at the basis of cryosleep for space travel or life extension.

The deep cold also reduces the speed of conduction of the nerve signals controlling the muscles. In addition, the cold vapor will also activate cutaneous receptors that will stimulate the sympathetic nervous system inducing peripheral vasoconstriction, tachycardia, and hyperventilation.

Staying even two or three minutes in a cryogenic chamber is not a trivial experience for the body. Hence, the potential risks but also associated benefits we will explore now.

What are the effects of cryotherapy on muscles?

It is well known that deep freeze carries many benefits for athletes when it comes to promoting recovery and promoting the muscles following training.

Therefore, during the last decades, numerous scientific studies have aimed at deciphering the molecular effects behind what was only known empirically.

In a non-pathological setting, cryotherapy was proven to favor muscle recovery even following the first exposure.

Furthermore, in a randomized control trial conducted by Kruger and de Marees in 2015, whole body cryotherapy proved to be effective on the acute recovery of well-trained running athletes.

Not only is the post-training perceived pain diminished, but the levels of Creatine Kinase, the molecules responsible for damaging the muscles, are also reduced (Lombardi et Zierman, 2017).

However, the benefits appear to be counteracted by the potential inhibition of anabolic processes when the treatment was applied on a chronic basis.

Interestingly, the exposure to ultra low-temperature also increased the levels of expression of myokines, the proteins produced while exercising, opening potential therapeutic strategies for treating metabolic diseases such as obesity and type 2 diabetes.

In a simulated 2 hours jogging, a 2 mins session in a cryo-chamber proved to be effective in reducing the expression of IL-proteins (IL-2, I-8) responsible for inflammation and muscle damages and increasing the levels of anti-inflammatory cytokine IL-10. (Pournot et al., 2011.)

Hence, the deep-freeze-induced vasoconstriction could protect the muscles and improve recovery by directly reducing the expression of pro-inflammatory molecules responsible for inflammatory processes and increasing the level of antioxidant enzymes.

When exposed to cold temperatures, the organism appears to increase its resistance to oxidative stress.

What are the effects of cryotherapy on the brain?

Stimulating the skin’s thermoreceptors directly affects the autonomous nervous system, which will induce benefits for the body and the mind.

Even if cryotherapy did not prove effective in reducing pain after Knee Arthroplasty, a significant increase in endorphins and noradrenaline was quantified.

In patients suffering from rheumatoid diseases, whole-body cold therapy proved to reduce pain during the 90 minutes that followed the treatment, even though no significant long-term effects were found.

Local cooling to improve sleep quality is well described and is at the center of innovative pillows such as the Moona to provide better sleep.

During training episodes, athletes tend to experience stress which impairs their sleep. However, this is not the case for athletes submitted to intense cold. Hence deep-cold treatments are an easy way to enjoy restful nights.

After just 10 sessions, Cryotherapy has been proven to reduce triglycerides and LDL (the bad cholesterol) while increasing HDL (the good cholesterol), leading to an improved lipid profile. However, despite these benefits, no effects on reducing the Body Mass Index (BMI) or the percentage of the lean feat were observed.

So despite being promising, staying in a cryo-chamber doesn’t appear to be the magic trick to lose weight effortlessly.

The Foof and Drug Administration does not regulate cryotherapy chambers. This is a point of concern. FDA scientists declared that they “found very little evidence about its safety or effectiveness in treating the conditions for which it is being promoted.” Hence, the lack of approval and clearance for devices that may carry many risks when not properly used.

The American Academy of Dermatology Association shares the same concerns. It does not recommend using WBC, stating that it could lead to worsening medical conditions, create new ones and be potentially deadly when not used properly.

In 2015, a young 24 years old woman from Las Vegas was found dead in one of the tanks of the Cryocenter she worked for. She stayed alone after her shift, and something obviously went wrong with the machine.

This raises the need to regulate an industry that uses the coolest substance on earth for unproven medical and cosmetic benefits.

To date, Cryotherapy benefits are only scientifically proven in sports medicine. However, cryo chambers benefit athletes or serious athletic people by reducing inflammation and pain while promoting recovery.

When it comes to the treatment of other diseases, the results are more controversial. For example, even if short-term positive results were described in chronic back pain, fibromyalgia, and rheumatoid polyarthritis, the long-term benefits were inconclusive.

New studies are needed to rigorously address the potential of a mode of treatment that carries many potentials, but that should not somehow be considered without risks. Numerous contraindications limit such an approach.

People suffering from cardiologic, pulmonary or neurologic diseases are not suited for such procedures that, if not conducted properly, can lead to headaches, cold-induced anaphylactic shock, and of course, severe frostbites.

When willing to experience such whole-body cryo-procedures, we strongly advise that you discuss them with your physician in advance. Also, such treatments should only be delivered in reputable centers or medical spas and under the supervision of trained professionals.

How dHealth aim to put blockchain at the heart of Healthcare?