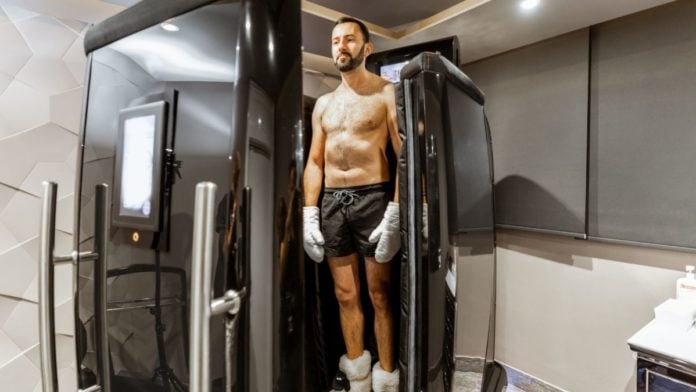 Cryotherapies mostly fall in the esthetic or medical procedures categories. Hence, they are most likely not covered by regular Health Insurance plans. Athletes use whole body cryotherapy to enhance recovery and prevent injuries, while celebrities favor extreme cold skin-toning effects.

Cryotherapy is cold, really cold. The body or skin will be submitted to temperatures down to -300 degrees Fahrenheit. So despite their benefits, real or psychological, cryotherapy needs to be considered carefully, especially for people suffering from preexisting conditions.

This article will describe how freezing temperatures can be beneficial, the potential risks involved, contraindications, and how to safely enjoy your couple of minutes’ stay in the coldest environment know to man.

How does cold therapy work?

The basic principles behind the use of liquid nitrogen are simple. The ancient Greeks already knew about the benefits of ice-cold baths. In 400BCE, Hippocrates, the father of medicine, recommended using an ice pack, rather ice or snow at the time, to cover soldiers’ wounds and prevent inflammation and bleeding.

Liquid Nitrogen has a boiling point of -320 degrees Fahrenheit, which will make it spontaneously turn into a gas. Depending on the type of cryotherapy, the cold vapor will be applied locally on the skin or in a hollow tank in which the patient body will be exposed for a couple of minutes.

What are the benefits and applications?

Cold therapy still lacks clear scientific evidence and recognition by the medical community but has been empirically shown to carry numerous benefits.

In 2020, Metzer et al. published one of the first articles showing Whole Body Cryotherapy’s short-term benefits on patients with rheumatoid arthritis. They submitted a sample of 120 patients for 2.5 minutes to a temperature of -105 degrees celsius. The level of perceived pain was significantly reduced for 90 minutes on average following the treatment. Unfortunately, long-term benefits were not found. Nevertheless, the authors concluded that such an approach was beneficial and valuable to include in rehabilitation programs.

Extreme cold will induce dramatic changes in the metabolism. It is believed that spending 2 minutes in a cryo-chamber could consume from 500 up to 800 calories. Hence, the idea of using Whole Body Cryotherapy in weight-loss programs. To date, no rigorous study has been conducted to support this hypothesis, which many celebrities have somehow favored.

Athletes have been using ice-cold baths for numerous years already, and more modern cryotherapies appear as a logical step. However, when applied to ankle sprains, no long-term benefits were sustained.

Somehow, for post-training recovery, the use of extreme cold therapies was found beneficial to reduce inflammation.

On the neurological system, cryotherapy appears to favor sleep and has even be suggested to be beneficial for patients suffering from Mild Cognitive Impairments or early Alzheimer’s disease. However, robust clinical trials are cruelly lacking to support this claim.

Cryosurgery relates to the use of cold probes to remove benign or malignant lesions and kill cancer cells while freezing the adjacent tissue to prevent metastasis. Mainly used for skin cancers, this approach has also been discussed for treating low-grade prostate cancers. However, despite the potential benefits of this approach, compliance was low, primarily due to pain.

Extreme cold therapy may carry a lot of promises but is still in its early stage. To date, both the medical association and the Food and Drug Administration do not recommend its use due to the lack of scientific evidence, contraindications, and associated risks.

Contraindications for the use of Cryotherapy

Depending on the type of deep cold procedure being conducted, cryotherapy contraindications can differ slightly. However, they are all mainly related to the potential risks of using liquid nitrogen to decrease tissue temperature quickly. The risk is to exacerbate a preexisting condition.

The Food and Drug Administration posted an article on their website to warn the potential users of the risks involved and lack of scientifically supported benefits.

The cardinal rules are that cryotherapy should not be performed on pediatric patients or people with claustrophobia. It makes a lot of sense especially considering the tightly enclosed cylinders used for whole-body cryotherapy.

When entering a cryotherapy chamber, the intense cold will produce vasoconstriction of the blood vessels to preserve heat. Even though smaller veins are considered positive for blood flow, this sudden reduction in the arteries’ diameter can dramatically affect the heart blood supply and potentially lead to heart attacks.

During the treatment, the systolic blood pressure may increase up to 10 points. These dramatic variations of blood pressure should not be overlooked as they can lead to severe health consequences.

Cryotherapy treatments are formally contraindicated to people suffering from:

The skin contains numerous thermal receptors. Some of them will detect heat, and others cold. Therefore, when using a cryotherapy machine, the skin will be the first body component to react to the sudden drop in temperature.

The contraindications related to the nervous system include patients with impaired sensation diseases such as diabetic neuropathy or other types of neuropathies.

People with behavioral disorders and impaired abilities to communicate are also formally contraindicated.

People suffering from cold allergies are, of course, strictly forbidden to use cold-induced therapies. Another contraindication relates to lung disorders. Inhaling gaseous nitrogen can have severe consequences on already weakened lungs.

As we mentioned, cold therapies will have an impact on body metabolism. Therefore, people with metabolic disorders, coagulation pathologies, chronic kidney disease, or urinary tract infections are also advised not to use such a treatment approach.

Especially for Whole Body Cryotherapy, the apparent risk is linked to asphyxiation due to excessive nitrogen inhalation and lack of oxygen. This can lead to people fainting in the cryo-chamber.

In Las Vegas, a couple of fo years ago, an employee was found dead inside a tank after she decided to use a whole-body cryo-chamber after her evening shift. Unfortunately, nobody was around to detect any potential asphyxiation and help her. This dramatic event emphasizes the need to always keep the head out of the chamber and never get a cryo-based treatment without the proper supervision.

Patients should be cautious of frostbites. All metal jewelry or object should be removed, and the skin must be dry when entering the tank. We all know that our hands and feet are especially sensitive to intense cold. Hence the need to wear socks and gloves during the treatment.

In 2019, NFL star Antonio Brown developed severe frostbites on his feet following a cryotherapy session that took a long time to heal correctly. Hence the need to strictly follow the protocol and not to consider extreme cold as without risks.

Cyotherapies are still uncharted territory even though they carry many hopes in enhancing recovery, treating benign skin lesions, or even favoring sleep. Nevertheless, such procedures somehow do not come without risks on contraindications.

To lose weight, cryotherapy machines may look like an attractive alternative to diet and regular exercise. Still, unfortunately, cold air may be revigorating but is not yet the magic trick that will let you shred pounds effortlessly.

Always talk to your doctor before booking a rejuvenation whole body cryotherapy 2 minutes session at temperatures that will make the North-Pole look like a tropical paradise.