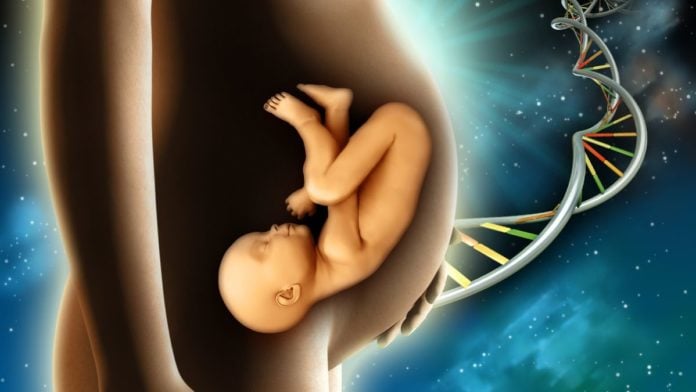 DNA tests are very different and can be done for a variety of reasons. Your doctor will request some clinically relevant ones. These genetic tests will mainly be used to assess some potential fetal genetic disorders. Other genetic tests may help determine the identity of the father.

Finally, at-home test kits will unravel the history of your distant past or even, as offered by some companies, assist in defining what could be your optimal diet or fitness regimen depending on your specific gene pool.

In this article, we will go through the different types of DNA tests available for expecting mothers and if being pregnant can impact the accuracy of the results.

Within the female reproductive system, sperm can survive up to five days. Having intercourse with different partners within this time frame can lead to doubts and anxiety. A prenatal paternity test is a solution to get rid of these feelings.

Previous methods required an amniocentesis during which amniotic fluid was collected or a chorionic villi sampling performed. These procedures were uncomfortable, required local anesthesia, and could lead to miscarriage (up to 1 in 100.)

Nowadays, new technologies allow Fetal DNA to be extracted directly from a simple mother’s DNA blood sample. A maternal blood draw is the only invasive thing needed. The DNA sample of the putative father is easily collected with a chick swab.

Non-invasive prenatal paternity (NIPP) tests can assess paternity with a 99% accuracy and be performed as early as the 8th week of pregnancy. In addition, it only takes from one to two weeks to get the results. However, fetal DNA paternity testing is not cheap. Court-approved paternity tests can cost up to $2,000 due to the complexity of the technology involved.

During pregnancy, the blood cells of the baby and the ones of the mother are mixed in a common bloodstream. Technology now allows to extract fetal DNA from the mother’s blood and sequence it. However, it is still impossible to differentiate the cells from the individual fetuses when pregnant with twins.

Paternity tests can have severe emotional and legal consequences, and it is essential to use certified laboratories complying with all the relevant quality standards.

The American Association of Blood Banks (AABB) maintains a list of Relationship DNA testing accredited laboratories and providers that you may find helpful to define with close to one hundred percent certainty who is the biological father.

Genetic paternity testing involves complex science and a hefty price. Gender determination relies on the same principles but is easier to achieve and comes as a much more palatable price tag.

OB-GYN can assess the sex of the baby at approximately 14 weeks using ultrasound. Companies now offer a prenatal test that looks for male DNA in just a single drop of the mother’s blood as early as seven weeks.

SneakPeek is a California-based company that offers just that for less than $100. Results are delivered online in just one week, and a FastTrack service is also available for an additional $50 to get the results in three days. The company claims that the results are 99.9% reliable.

Pregnancy is a stressful time in the life of any woman. We will not talk about the clinical DNA tests ordered by a doctor to evaluate genetic disorders and used as diagnostic tests.

At-home DNA tests are different, and even if some of them can be used to assess the probability of developing a genetic disease, most of them will only scratch the surface.

Ancestry DNA tests are a fun and exciting way to go back in time and trace your family lineage. However, pregnant women can somehow wonder if the results will be their own or if fetal DNA will also be detected.

As we mentioned for a DNA paternity test, the expecting’s mother blood will carry some genetic material from the fetus. That is why blood-based DNA tests could potentially be contaminated by the baby’s DNA and should be avoided.

Most of the companies offering at-home Ancestry analyses use either a spit sample or a chick swab to collect cells from the mother. This sampling method ensures that only the mother’s DNA is collected. Thus, while pregnant, there is no risk that the DNA of the unborn child will be analyzed.

Numerous companies also allow screening for potential genetic diseases that can be passed to your unborn baby.

The prices vary from a couple of hundred dollars up to several thousand dollars for clinical analyses performed in certified laboratories.

All these tests will not collect samples from the mother’s bloodstream but instead only focus on cells from the pregnant woman.

Hence, they will not detect a potential chromosomal abnormality carried by the baby. They will only address the possibilities of carrying and potentially passing a genetic disorder to the fetus. A DNA test can be complex to decipher, and your doctor should be the only one to evaluate the results from clinical genetic testing.

Most of the genetic disorders are expressed by combining the gene pool from the mother and father. Therefore, interpreting the risks linked to a genetic disease will require testing both parents. Suppose a genetic trait with a potential associated risk is detected in both samples. In that case, it may be interesting to talk to your OB-GYN, who will conclude if a more extensive prenatal DNA testing and consultation with a genetic counselor are is required.

Are DNA tests safe while pregnant?

As long as the DNA is collected in non-invasive ways, DNA tests are perfectly safe for pregnant women.

Chorionic villus sampling or amniocentesis carries a limited risk of miscarriage but are the only ways to collect cells from the fetus and detect rare genetic disorders. However, circulating DNA samplings have made tremendous progress in recent years, and even trisomy-21 can now be assessed with up to 98.6% certainty without the need for invasive fetal-DNA collection.

A DNA test while pregnant is not only helpful in determining a potential congenital disability or genetic disorder. Prenatal paternity testing is now standard practice. As long as the potential dad agrees to provide a DNA sample can be a quick and easy way to reduce stress about the father’s identity.

Non-invasive prenatal paternity tests are easy, reliable, and can even be used in courts if the laboratory complies with the regulation and holds the required certification.

Genetic tests to sneak a couple of weeks earlier on the sex of the baby can be interesting for impatient parents that do not want to wait for the ultrasound determination.

Finally, expecting mothers can be reassured that DNA ancestry tests will be their own. Using an at-home DNA test kit to assess the risk of a genetic disorder can also be an easy way to be relieved. In some instances, testing both parents can also bring some diagnostic value in deciding if more robust tests are needed.

Sneak Peek gender test: What you should know before ordering!