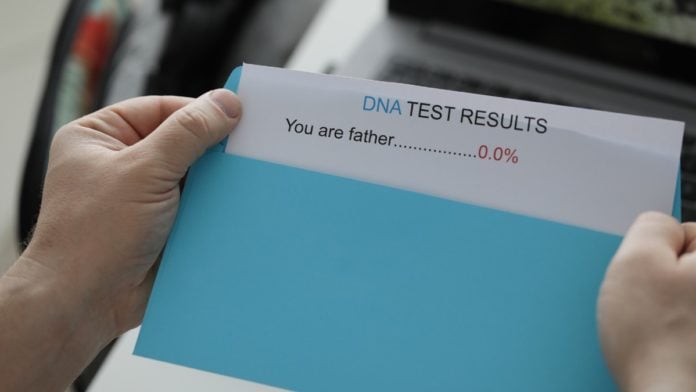 In a world where the number of unmarried women childbearing is expanding -more than forty percent in the United States, according to the CDC- a paternity test can be the best way to assess who the alleged father is.

Sperm can survive up to five days in the female tract. Therefore, in the case of multiple intercourses with different partners during the fertile period, it may be difficult to know with absolute certainty if the name on the birth certificate is the true biological father.

A Paternity affidavit is not enough, and a DNA paternity test is the only way to remove any doubt. These DNA tests are accurate at more than 99.9 percent. The real issue will arise in case the father refuses to submit to a paternity test,

What are the options? Is it illegal to do a DNA test without consent? These are the complex questions we will aim at answering in this article.

Is it possible to do a DNA test without the consent of the other party?

A genetic test to assess the legal father can often become a complex process if the mother refuses it or if the circumstances do not allow to perform genomic testing easily.

Two main scenarios can arise depending on who is the legal guardian.

If a father is listed on the birth certificate, he will be considered a legal parent and not need the mother’s consent to proceed to a paternity test.

Putative father not listed on the child’s birth certificate

Things will become more complex if the mother has legal custody of the child and the putative father’s name is not mentioned on the birth certificate.

In that case, the mother will need to accept the test and sign an informed consent. Without her approval, the test will have no legal value, and no legally enforceable action will be possible.

For peace of mind, an alleged father may somehow want to collect a DNA swab sneakily or collect other DNA evidence, but the test results will have no legal value in front of family court.

In that case, the only option is to go to court and aim for a decision that will enforce a paternity petition mandating the sampling and analysis of DNA.

In some cases, putative fathers will refuse the mother’s request to collect his genetic information. In that case, and without a court order decision, a possibility may be to collect DNA samples from the putative paternal grandparents.

If the putative father passed away, or if the father is unwilling to accept a sampling of his DNA, it is possible to assess parentage using DNA samples from the grandparents. It is usually recommended to collect DNA from both grandparents and not only from one. It will then be possible to use the results to conduct a paternity action.

Even though there are no laws that define paternity testings within the state of New York, guidelines are enacted by the New York State Department Of Health (NYSDOH). As a result, New York State is the only state where companies cannot send a test directly to the consumer.

– A prescription from a doctor registered in the state,

– A request from an attorney licensed in the state.

The DNA sample will be collected by an accredited physician and will follow a chain of custody.

The laboratory performing the paternity test will need to be accredited by the American Association of Blood Banks (AABB) in case the results of the DNA testing are intended to be used as DNA evidence in front of a court to assess paternity.

Finally, for children born out of wedlock, the mother has to consent to collect a DNA sample of the child. This requirement can become a massive hurdle in case the relationships with the custodial parent are conflictual.

With more restrictive regulations, the States of New York ensures that genetic testing follows rigorous scientific and legal standards. However, for fathers willing to assess their parental rights, the journey may be a challenging one.

Finally, considering the strict regulations, at-home DNA test kits are not recognized by a court of law within the state of New York.

We strongly recommended not to be sneaky but to follow the roadmap dictated by the state of New York when conducting a DNA paternity test.

Having to resolve a DNA paternity test is always a traumatic process, especially if the parties are not willing or capable to provide a sample.

To be legally enforceable, DNA sampling requires the consent of the mother or legal guardian if the father is not listed on the child’s birth certificate.

In the State of New York, regulations are even more restrictive, and conducting a “peace of mind” test will be useless in front of a court and lead to legal consequences.