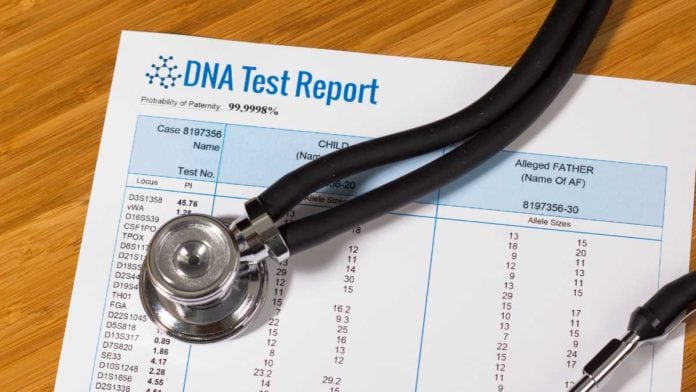 According to Statista, 2021 will be a record year for DNA testing. They estimate that the year will end with a staggering 100 million Direct to Consumer (DTC) genetic testing kits.

Not all tests are created equals, though. For example, it isn’t easy to compare a recreative ancestry DNA test to a legally binding DNA paternity test.

Whatever the reasons for conducting a DNA test, the legitimate question is to wonder if a DNA test can provide wrong or inaccurate results?

This article will explore the various reasons a genetic test can go south and how to address them.

What is the overall accuracy of DNA tests?

The human genome comprises 3 billion individual chemical elements constituting the 20,000 genes of anybody’s genetic makeup. That is potentially a lot of genes to read, mutations to identify, and results to interpret.

Most of the tests will read the complete genome and will only focus on specific regions of interest. By analyzing partial information, the accuracy of the conclusions drawn may suffer.

Whole-Genome sequencing technologies, such as the one used by Nebula Genomics, are the only type of test that will read the whole code of life up to 100 times to ensure that any single DNA mutation is detected.

Accuracy usually comes at a price, but there are no shortcuts, and cheap, preliminary tests may not offer the results you expect.

Recently a Consumer Genetics company received negative attention when it labeled “Bailey the Golden Retriever” DNA as human DNA and produced a comprehensive report about his potential athletic and baseball skills.

Depending on the number of variants analyzed and how the bioinformatics tools combine them, the results can vary drastically between one DTC company and another. Thus, without being wrong, the conclusions may vary substantially.

Recently Dr. Adam Rutherford published an interesting article in Scientific American offering his insights on the need always to consider the results with a grain of salt. The key elements are limiting the incertitude as much as possible and trusting the results delivered.

A child will receive half of its genetic material from his mother and a half from his father. Hence, this direct transmission of genetic material will limit the impact of potential mutations on the accuracy of the results.

For paternity testing, the analysis of 15 markers is usually sufficient to guarantee an accuracy of 99.99%. Some companies even go the extra mile and use up to 21 markers to guarantee the reliability of the results.

Overall, DNA paternity tests are very accurate, but as with any test involving cutting-edge science and human intervention, things can eventually go wrong.

Why could a DNA test be wrong?

An inaccurate DNA test can result from either a human error, lack of proper coverage of the DNA strands, or bioinformatics shortcuts.

Especially for DNA paternity tests, the validity of the results is of critical importance. Court-ordered samples must follow a chain of custody to ensure that the samples are not tampered with.

Deliberate fraud is rare. According to an analysis conducted in the United Kingdom, only 1.6% of incorrect sampling can occasionally occur.

When sampling DNA with a swab, simple precautions must be followed to collect sufficient and uncontaminated DNA. Among them, we can cite to:

Nowadays, Samples are bar-coded, and even if a mislabelling of a sample is rare, it can happen. Samples can also get contaminated during the analysis, being incorrectly processed, or the results mixed up. Here again, automation is now used extensively in genetic laboratories. Always choose a company that will process the samples in CLIA certified laboratories to ensure the robustness and quality of the analyses.

Child and Alleged Father are Related

For paternity testing, false-positive results can eventually occur if the child is already related to the alleged father. Think two brothers.

Some additional markers may be needed to assess paternity. The results will not be wrong but inconclusive and will require further analyses.

When testing DNA through DTC services, the main issue may be linked to the panel of markers analyzed to conclude.

Most at-home DNA testing companies will work on a set of pre-defined markers using a DNA or micro-array chip. These chips will include thousands of genetic markers that will act as hooks to detect specific mutations on the DNA strands.

New markers are discovered and correlated with diseases or other types of ancestry analyses every month, meaning that DNA chips and computer algorithms can not be modified continuously, thus, leading to results that are not as accurate as expected and could vary depending on the markers chosen by the company.

Hence, the results you will get may be based on a set of research that is already years old and does not consider the constant flow of discoveries in genetics.

One way to bypass this issue is to use whole-genome sequencing that will use different technology and will read the whole DNA sequence.

Once the raw data are collected, the results can be updated by including the discoveries in the bioinformatics algorithm. A company such as Nebula Genomics will update its reports every month to follow the fast pace of scientific discoveries as much as possible.

Genetic results are a matter of probabilities

Especially for DTC genetic test, the results are often presented as a set of probabilities.

Probabilities are at the center of genetic. It all started with Gregor Mendel calculating the chances for peas to inherit a trait from the previous generation.

It goes the same way with human genetics. Inheriting genes for a child is like shuffling a 20,000 cards deck with half of it coming from the dad and the other half from the mum.

On top of that, especially for pathologies, the occurrence of a disease may not be linked to a single gene but to the interaction of several of them.

Hence, DTC genetic companies will express the results as a probability of developing a disease or a trait.

What can you do if you suspect a DNA test is wrong?

There are several easy things to do if you are not fully satisfied with the results.

Talk to a genetic counselor

Genetic is complex, and what can appear as wrong may be a matter of interpretation. Some companies include the possibility to analyze the results with the help of a specialized genetic counselor. Do not hesitate to talk to a trained specialist.

As we mentioned, genetics is a world of gray zones, and pure black or pure white rarely exists. When in doubt, show the results to your doctor or a genetic counselor. This may be the easiest and most efficient way to get the answers to the questions and clear the doubts you may have about the validity of a test.

Ask for the raw data

Serious genetic companies now offer the possibility to download the raw data and analyze them using the algorithms developed by other companies.

This can be very informative as each company will have its “secret sauce” when analyzing the results. Moreover, especially for whole-genome sequencing, it can be enlightening to get answers using various bioinformatics algorithms.

Take a test with another company

The results of a test will often differ from one company to the other. For Ancestry analysis, companies heavily rely on their database of customers to infer the correlation between the results. Depending on the quality of their database, results may be different.

For paternity testing, companies aim at offering a 99.9% accuracy. If you still have doubts, we suggest you proceed with another company that may use different testing standards and protocols. If the results are still the same, there will be little room left for doubts.

Even though no test is 100 percent accurate, DNA tests have come a long way in the last couple of years.

DTC companies offer the possibility to test thousand of mutations. However, whole-genome sequencing goes one step further and will decipher the complete DNA sequence.

Yes, a DNA test can be wrong. For example, the sample may have been contaminated, or the results may have been incorrectly entered. But overall, DNA tests are very accurate.

When in doubt, always talk to your doctor and keep in mind that your behavior will also significantly impact the expression of your genes. So even if your gene pool tends to favor the development of a disease, it may ultimately be the lifestyle that will trigger its development or not.

As science evolves, so will the results of a DNA test.

Record investment for Digital Health Startups in 2021: What does it mean for the future of healthcare?