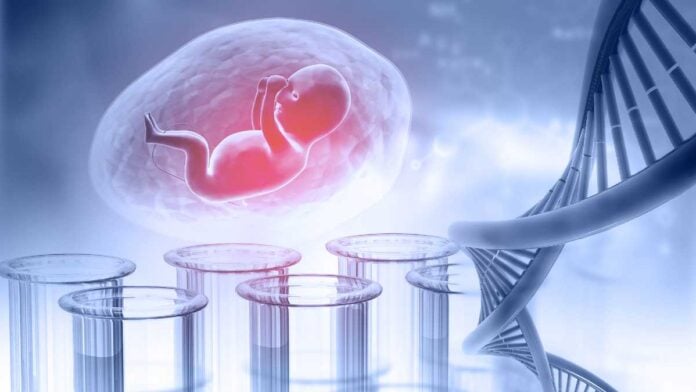 Up to recently, an ultrasound at 18-20 weeks was the method of choice to take a sneak peek at the gender of the baby.

For more than 40 years, prenatal identification of chromosomal abnormalities has been available, first by amniocentesis in the early 1970s and then through chorionic villus sampling (CVS) in the early 1980s.

These analyses were mainly used to detect genetic disorders. Still, new technologies exist to test the DNA present in the mother’s bloodstream and define the sex of the child to be as early as seven weeks during the pregnancy.

These tests are not aimed at providing medical diagnostics but just at defining the baby gender earlier than other methods could do.

What are the scientific bases of such tests?

Studies have found that more than half of women and their partners want to know the gender of their kids before giving birth.

The scientific basis of such tests is simple.

Cell-free DNA fragments (cfDNA) are small DNA fragments that circulate in the blood. DNA fragments from both the mother and the fetus. They are found in the maternal blood throughout pregnancy. If enough fetal DNA is in the mother’s blood sample, the chromosomes present can be analyzed.

The science underpinning the testing is sound, but any promises of accuracy should be taken with a grain of skepticism.

Contamination is possible. Your blood sample might be tainted even before it leaves your house: For example, if a guy comes into contact with your test kit, the test may incorrectly classify a female baby as male. Other factors that might lead to erroneous findings include a recent miscarriage, a missing twin, or a high BMI.

Unknown laboratory settings. The laboratories that process at-home gender DNA test kits may not be certified the same way as labs dealing with medical genetics diagnostics.

How accurate is DNA testing for baby gender?

The accuracy of the test is currently around 98%, and there are three possible outcomes:

Accuracy claims are generally supported only by internal corporate studies rather than by outside, unbiased research. For example, such an issue appears in an extensive study involving more than 1,000 expecting mothers. The main issue of such a study is that it was promoted and conducted by the company offering the test.

What are the Baby Gender DNA tests to consider?

Numerous companies offer early gender determination, and all rely on the same principles of collecting a sample of blood, either via a finger prick or painless microneedles blood collection.

Once the sample is sent back to the company and the kit activated, the results will usually take a couple of days to be updated. Some companies even offer an express 24 hours service even though we do not see its benefits considering that the pregnancy will continue for many more months.

Below are three companies whose kits are readily available and with good reputations.

The company offers gender prediction kits at early as seven weeks and let clients sample their blood either via a standard lancet kit that will require collecting a drop of blood or via an arm snap kit relying on microneedles to collect interstitial blood through the microvessels of the superficial skin layers of the skin.

The company even issues a refund if the sex of the baby after birth does not match the provided results.

To guarantee privacy, the DNA samples are systematically destroyed following the analysis.

The DNA Diagnostic Center offers the Peekaboo DNA Gender Prediction test. This company does not only focus on gender determination but offers a full range of DNA testing kits for paternity, Ancestry, and even pets.

The kit is the only one endorsed by the American Pregnancy Foundation.

Interestingly, the blood collection can be performed either at home or at one of the partner laboratories. This is an exciting way to ensure that the sample is not contaminated.

Some very inexpensive urine tests claim to give the possibility to detect the gender of the fetus. The issue is that there are no fetal sex hormones or fetal DNA to be found in the mother’s urine.

If you do not have the patience to wait for the ultrasound determination, a maternal blood sample and a baby gender DNA test are the best ways to determine the gender of the baby to come.

Non-invasive prenatal tests indeed come at a cost, and finding male chromosomes in the mother’s bloodstream may also carry some uncertainties. Still, the results give the best chances of finding a baby’s gender early in the pregnancy.

Sneak Peek gender test: What you should know before ordering!

Can you take a DNA test while pregnant? [Solved]