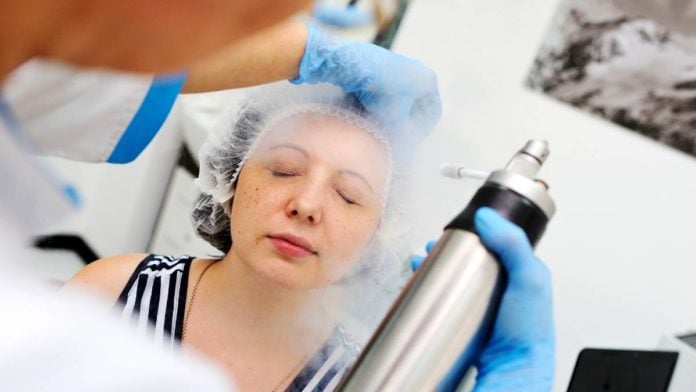 Cryotherapy is becoming an ever more popular therapy, with the global cryotherapy market estimated at $3.8 billion and growing year by year. It has a wide range of uses, including medical, wellbeing, aesthetics, and weight-loss treatments. If you’re wondering, “How much does cryotherapy cost?” the price can vary depending on the type of treatment you are receiving as well as how many sessions you will need.

Medication cryotherapy, also known as cryosurgery, where your doctor or health provider uses extreme cold to freeze abnormal cells so that they can be removed. These cells can include cancer cells or cells that have the potential to become cancerous, as well as skin problems such as warts.

This is the use of cryotherapy as a beauty treatment and as a way to improve the skin’s visual condition. It can include reducing hyperpigmentation, skin lesions, keloids, and age spots.

The cost of facial aesthetic cryotherapy is usually $40-$70 per session.

Weight-loss cryotherapy is a method of freezing fat cells to help sculpt your body. It is usually performed on areas of the body that are unresponsive to fat loss through exercise and dieting, and the treatment is targeted to these specific areas. Therefore, it isn’t a method that will help you lose weight overall but instead will remove fat only from those areas that are treated.

The cost of cryo-sculpting ranges from $250-$350 per area (the price will increase if you target more than one).

How Much Does Full-Body Cryotherapy Cost?

With whole-body cryotherapy, your entire body is immersed in a cryotherapy chamber. In some types, you sit in a chamber with your head and neck outside at room temperature, but with others, you step into a chamber so that your entire body is immersed. The temperature within the chamber is then lowered to sub-zero temperatures (between -110o and -140oC) for a short period of time, which sets off a range of physical processes that can help improve your health and wellbeing.

A single session of whole-body cryotherapy is usually between $50 and $70, but some companies offer discounts for your first session.

How Many Sessions of Cryotherapy Are Needed?

A single session of cryotherapy won’t usually be enough for you to experience the benefits of the treatment. Therefore, it is often recommended that you have at least one to three sessions a week and as many as four to five if you have a condition that requires intensive treatment.

Whether or not cryotherapy is covered by health insurance will depend on the type of treatment you are receiving. Medicare has covered medical cryotherapy (cryosurgery) since 1999. Other forms of cryotherapy, including aesthetic, weight-loss, and whole-body cryotherapy, are not usually covered by medical insurance, however.

Is Cryotherapy Worth It?

Whole-body cryotherapy has been recommended for decades as a treatment for arthritis and other rheumatoid conditions. It can also be an effective treatment for fibromyalgia, migraines, and ankylosing spondylitis, and it helps aid recovery for athletes. Cryotherapy can reduce both the pain and inflammation associated with these conditions and with intense athletic training.

It is a non-invasive and drug-free treatment, and there is no evidence that it causes any harm on a biochemical level and doesn’t cause any long-term strain on the heart or circulatory system. In addition, many people living with these conditions welcome a treatment that won’t cause side effects. That helps them be less reliant on pain medication, so cryotherapy can be worth it in those cases.

It may also help treat certain mood disorders because, in addition to reducing pain and inflammation, cryotherapy also triggers the body to release hormones. These include adrenaline, noradrenaline, ACTH, cortisone, POMC, endorphins, and testosterone in males. For example, one study found that half of the people suffering from anxiety and depression symptoms who took part in one week of cryotherapy treatment had more than 50% reduction in their symptoms. They continued to improve over three weeks of sessions.

As with cryotherapy as a treatment for pain conditions, many people who receive medical treatment for anxiety and depression disorders are reluctant to take medications because of the side effects they may experience. And medication isn’t always effective. Nevertheless, Cryotherapy can be a promising treatment that appears to work relatively quickly.

With that being said, care should always be taken when undergoing cryotherapy. It uses extreme cold and, if delivered incorrectly, this can cause health risks (some of which are serious). Cryotherapy can cause temporary redness, irritation, and numbness in the skin, but these aren’t usually of any long-term concern.

In whole-body cryotherapy, you should be in the chamber for two to three minutes and no longer than five minutes. When your body is subjected to extreme cold, it lowers your heart rate, increases your blood pressure, and lowers your respiration rate. Experiencing this for too long can cause severe health problems that have the potential to be fatal. Most cryotherapy centers, however, have strict measures in place to ensure that clients are in the cryotherapy chambers for the correct amount of time.

Because of the extreme cold, there is also a danger of frostbite in sensitive areas if gloves, socks, or earmuffs aren’t worn. Again, most cryotherapy centers have dress codes in place to ensure that clients are suitably protected.

As long as the proper safety precautions are in place, cryotherapy can be an effective treatment for pain conditions, as a sports therapy, and as a way of improving wellbeing. It is important, however, to be aware of the potential dangers of a treatment that involves such cold temperatures because they can have a severe impact on the body if the treatment is conducted incorrectly.

Cryotherapy is a popular treatment method that can reduce pain and inflammation, improve mood, improve the appearance of your skin, and be used to treat certain cancers. The cost varies depending on the type of treatment and how many sessions are needed, and only medical cryotherapy is currently covered by health insurance.

While cryotherapy can have some significant health benefits, it is essential to be aware of the potential risks involved if the proper care isn’t taken.